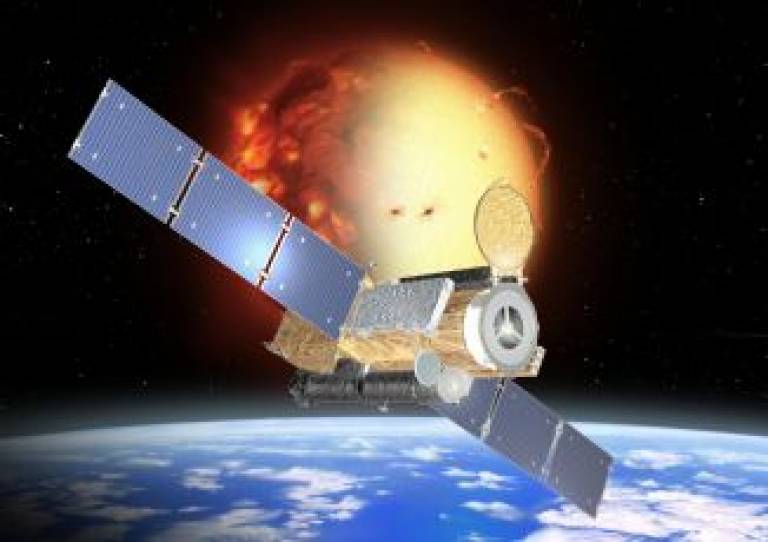 A conference to mark the first birthday of Hinode - the joint British, American and Japanese space mission into the workings of the Sun - will take place in Dublin this week.

A major aspect of the conference will be devoted to the new discoveries made possible by the Extreme Ultraviolet Imaging Spectrometer (EIS), designed and built by a team led by Professor Louise Harra from the UCL Mullard Space Science Laboratory (UCL MSSL). The EIS acts as a solar speed camera, and has recently been used to pinpoint the source of plasma that streams from the Sun during a solar flare, and provide new insights into 'coronal heating' - the mechanism that supercharges the temperature at the outer layer of the Sun.

Solar flares - massive energetic explosions that rise up from the Sun - can damage manmade satellites and pose a radiation hazard to astronauts. Despite decades of previous studies, many aspects of solar flares are still not well understood. However, Hinode observations bring new light to possible mechanisms that accelerate solar particles in flares.

Professor Louise Harra said: "We knew that solar flares can impact a vast area on the Sun, sometimes leaving behind mysterious 'dark patches'. Using Hinode, for the first time we have been able to train a speed camera on the material in these dark areas - which can be twenty times the diameter of the Earth. We have witnessed material flowing from the dark patch in the wake of the flare, feeding the particle flow that can cause such problems for anything in its path as it hurtles through space at 2000 times the speed of a fighter plane.

"In the long term, understanding solar storms in this new level of detail will allow us to make better predictions of 'space weather' storms. This is critical for our communications via satellite technology which we now take for granted."

The conference is being hosted by Trinity College Dublin between 20¬-24 August. To find out more about the event and Hinode, use the links at the top of this article.