A neuroscientist has induced out-of-body experiences in volunteers for the first time at UCL, as a paper published today in 'Science' explains. 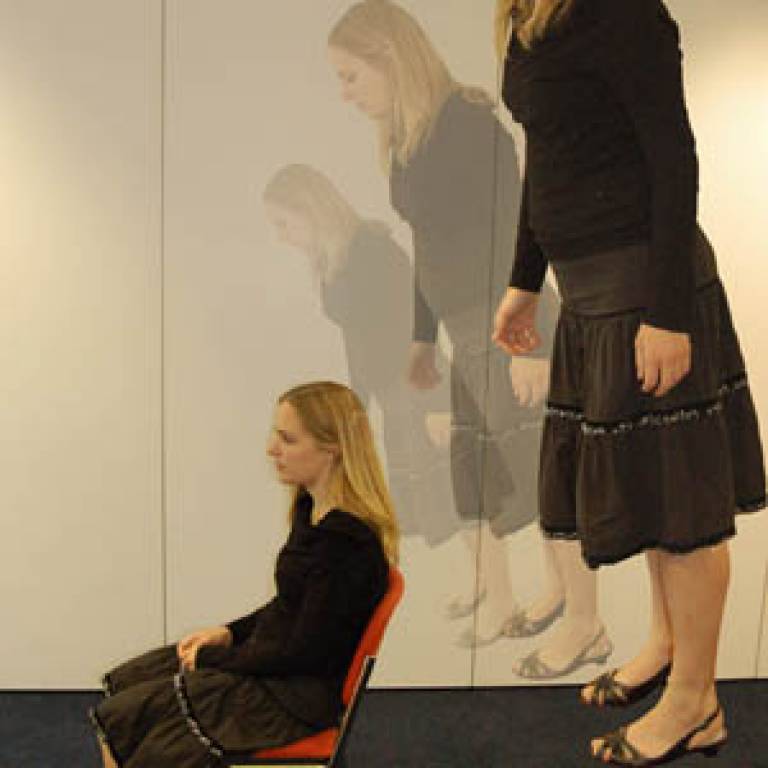 In 'The experimental induction of out-of-body experiences', Dr Henrik Ehrsson, who was a researcher at the UCL Institute of Neurology at the time, outlines the unique method by which the illusion was created and the implications of its discovery.

An out-of-body experience (OBE) occurs when a person who is awake sees their own body from a location outside the physical body. OBEs have been reported in clinical conditions where brain function is compromised, such as stroke, epilepsy and drug abuse. They have also been reported in association with traumatic experiences such as car accidents. Around one in ten people claim to have had an OBE at some time in their lives.

The illusion worked by using head-mounted displays to enable participants to watch a live film recorded by two video cameras located behind their head. The image from the left video camera is presented on the left-eye display and the image from the right camera on the right-eye display. The participant sees these as one 'stereoscopic' (3D) image, so they see their own back displayed from the perspective of someone sitting behind them.

The researcher then stood just beside the participant (in their view) and used two plastic rods to simultaneously touch the participant's actual chest out-of-view and the chest of the illusory body, moving this second rod towards where the illusory chest would be located, just below the camera's view.

The participants confirmed that they had experienced sitting behind their physical body and looking at it from that location. Dr Ehrsson, who now works at the Karolinska Institute in Stockholm, said: "This was a bizarre, fascinating experience for the participants - it felt absolutely real for them and was not scary. Many of them giggled and said 'Wow, this is so weird!'"

To test the illusion further and provide objective evidence, Dr Ehrsson then performed an additional experiment to measure the participants' physiological response - specifically the level of perspiration on the skin - in a scenario where they felt the illusory body was threatened. Their bodily response strongly indicated that they thought the threat was real.

Dr Ehrsson said: "Out-of-body experiences have fascinated mankind for millennia. Their existence has raised fundamental questions about the relationship between human consciousness and the body, and has been much discussed in theology, philosophy and psychology. Although out-of-body experiences have been reported in a number of clinical conditions, the neuroscientific basis of this phenomenon remains unclear.

"The invention of this illusion is important because it reveals the basic mechanism that produces the feeling of being inside the physical body. This represents a significant advance because the experience of one's own body as the centre of awareness is a fundamental aspect of self-consciousness."

Discovering this means of inducing an OBE could also have industrial applications, as Dr Ehrsson explains: "This is essentially a means of projecting yourself, a form of teleportation. If we can project people into a virtual character, so they feel and respond as if they were really in a virtual version of themselves, just imagine the implications. The experience of playing video games could reach a whole new level, but it could go much beyond that. For example, a surgeon could perform remote surgery, by controlling their virtual self from a different location."

The creation of this perceptual illusion stems from an idea Dr Ehrsson had as a medical student, when he wondered what would happen to the 'self' if you could effectively move your eyes to another part of the room, just a few metres away, so you could observe yourself from an outside perspective. Would the self 'follow' the eyes or stay in the body?

Dr Ehrsson added: "The illusion is fundamentally different from anything published previously. It is the first to involve a change in the perceived location of the self, relative to the physical body. It is also different from any virtual reality set-up because it examines what happens when you look at yourself, and there is also multisensory information that triggers the illusion. There has been no way of inducing an OBE in healthy people before, apart from unsubstantiated reports in occult literature. It's a very exciting development, and has implications for a range of disciplines from neuroscience to theology."