Nine members of the Xtreme Everest team have reached the summit of Cho Oyu and have returned safely to Kathmandu, Nepal. 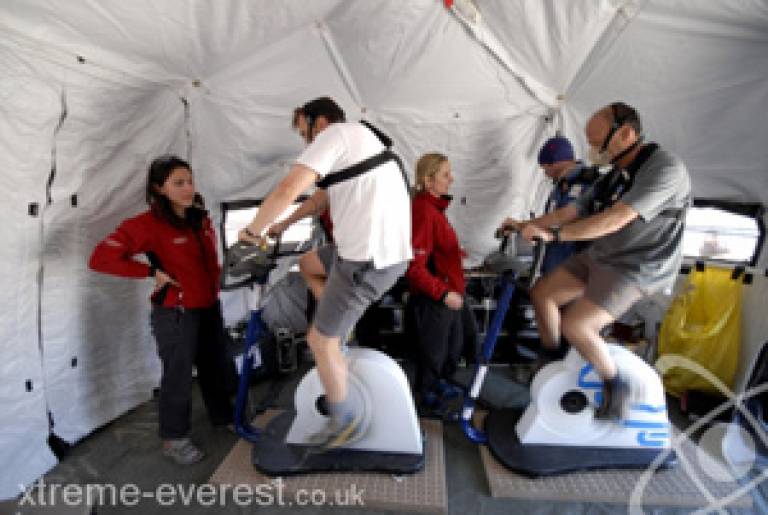 Xtreme Everest is a group of doctors and scientists coordinated by the UCL Centre for Aviation, Space and Extreme studying how the human body functions in extreme environments.

Mike Grocott, Hugh Montgomery, Dan Martin, Sundeep Dhillon, Paul Gunning, Patrick Doyle, Chris Imray, Jon Morgan, and Maryam Khosravi all reached the 8,201m peak at 6.45am on Monday 2 October. They were accompanied by Sherpa Pma Chhiring, Sherpa Nima Gombu, Sherpa Pasang Tenzing, Sherpa Dawa Tenjin, Sherpa Phura Geljen, and Sherpa Thundu. At the summit the team took a sample of human blood from an artery, which Sherpa Pasang raced back down to Camp One in an ice slurry for analysis by medics.

To make it safely to the summit and back to Advanced Base Camp, the Xtreme Everest team members had to contend with high winds and extremely low levels of oxygen over the 17-hour day. Three of the team had been on their feet even longer, having set off four hours previously to start the ascent from the next camp down.

The previous ten days had seen some of the worst weather fronts in recent history, and only one of the team had been above 8000m before, although the Sherpa team has multiple ascents of Cho Oyu between them. Medical Officer, Denny Levett, aided by Alex and Chris Van Tulleken, were involved in assisting a climber from another team high on the mountain.

The challenges continued during the walk back down to intermediate base camp. The team was confronted with a sandstorm, the disappearance of some of the 46 yaks that were to carry their equipment, and a jeep breakdown.

Overcoming such difficulties is just what this second dry run was for: Xtreme Everest aims to take a research team to the summit of Mount Everest in 2007 and make the first ever measurement of the level of oxygen in human blood at 8,850m.

This will be the centrepiece of a large-scale research programme into low oxygen levels (known as 'hypoxia') and human performance at extreme altitude. It is hoped that the findings will help improve the care of critically ill people and other patients severely affected by low oxygen levels.

Image: Dr Hugh Montgomery and Dr Mark Wilson on exercise bikes at altitude, breathing through tubes inserted via the nose, to find out more about oxygen delivery to the brain, muscle, and gut