A little over a year after the South Asian earthquake, as charities, aid organisations and governments continue to struggle with its aftermath, UCL Civil &amp; Environmental Engineering is launching a new MSc in Earthquake Engineering with Disaster Management. 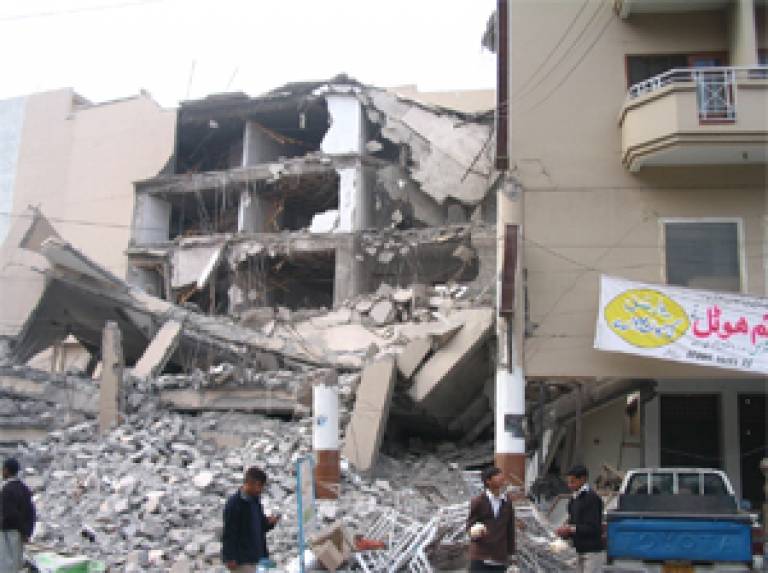 The unique programme is designed to tackle some of the gaps in skills and expertise that have affected relief efforts in the region.

The impact of the Pakistan Earthquake is still being felt by survivors as they approach their second winter after the disaster. The quake, which struck on 8 October 2005 and measured 7.6 on the Richter scale, claimed the lives of 75,000 people in Northern Pakistan and India, including 16,000 school children. More than three million people were made homeless.

Dr Tiziana Rossetto, Programme Director for the new MSc, is a member of the Institute of Structural Engineers' Earthquake Engineering Field Investigation Team (EEFIT). She went to Pakistan shortly after the earthquake to assess the damage to buildings and found that 80 per cent of all buildings had collapsed in some regions, whether rural dwellings or modern, multi-storey buildings. Schools were particularly vulnerable to the disaster because they were not constructed according to any earthquake safety standards.

Dr Rossetto said: "In the main, these modern buildings were constructed with huge, heavy slabs of reinforced concrete supported by relatively small columns. During the earthquake, these were seen to 'pancake', causing a huge death toll." Houses in the area were often single-storey structures of stone and mud, and were not strong enough to withstand the violent shaking of the ground.

Since the disaster, ongoing relief efforts have been conducted by charities, aid agencies and governments. Charities have tended to be involved at the grassroots level, working with local people to direct their input to the reconstruction process. Organisations such as the Red Cross are offering long-term support in more isolated areas and helping to restore educational, health, sanitary and community facilities. GOAL, an organisation funded by the United States Agency for International Development (USAID), is conducting work in the area of Bagh, in Northern Pakistan, training local builders in earthquake-resistant construction techniques.

The terrain in the region has made relief operations very difficult. The affected areas, located in the foothills of the Himalayas, are prone to landslides, which can block roads and make access for vehicles impossible. After the winter, the risk of landslides due to melting snow continued to put people living and working there at risk.

The aid effort in Pakistan has also encountered organisational difficulties. A discussion on 'Aid-Reconstruction-Redevelopment', held at the Serpentine Gallery in Hyde Park in September, outlined a number of areas in need of improvement in disaster relief.

On the panel at the talk were Jane Cocking, Deputy Humanitarian Director for Oxfam GB; Jo da Silva, Associate Director of Arup and Senior Shelter Coordinator for the UN High Commission for Refugees; and Professor Paul Jowitt, Chair of International Development Policy for the Institute of Civil Engineers.

During the discussions the panel noted that the complicated interactions between relief and reconstruction operations can lead to inadequate responses in both areas, whereas sound master-planning and greater consultation with people affected on the ground can make both activities more effective.

In the immediate post-disaster scenario, of course, things are more complicated. While there is a great need for shelter, there is little time for detailed decision-making about where shelters are placed. Immediate needs can be addressed with temporary measures that are often inexpensive. These needs vary from one disaster event to another, and experience has shown that ascertaining the needs of affected civilians by increased consultation can have more impact. However, it is important to establish a timescale for reconstruction work that allows for consultation with engineers so that sustainable, hazard-resistant and culturally acceptable building solutions can be found, thus addressing long-term goals in reconstruction.

The panel also observed that many of the people working in the management of disasters do not have a background in engineering, while the process of master-planning for reconstruction requires engineering expertise. By the same token, many engineers involved in reconstruction and recovery often have little or no experience of disaster risk mitigation. Such skills are usually only gained by experience, for example through field work in disaster areas.

The new MSc in Earthquake Engineering with Disaster Management, which starts in September 2007, is designed to tackle many of these issues head on. The course embraces a holistic approach to seismic-proof design, specialising in earthquake engineering, but also imparting the skills to allow engineers to select and assess the overall effectiveness of risk mitigation and risk management solutions in application to different contexts.

The Earthquake Reconstruction and Rehabilitation Authority, established by President Musharraf of Pakistan to raise money for reconstruction, aims to rebuild at least 25 per cent of schools destroyed by the earthquake by 2007. Civil and earthquake engineers have a huge role to play in the process of reconstruction and recovery for the area. It is vital that engineering expertise is employed to build upon existing infrastructure so that future generations are further protected from any recurrence of the catastrophe in Pakistan. The new MSc from UCL Civil & Environmental Engineering will play a pivotal role in facilitating this process, benefiting victims of this disaster and future tragedies.

Dr Rossetto said: "Through the new programme we hope to sensitise the engineering community to the wider, social impact of earthquake hazards so that these issues can be incorporated in hazard-resistance design. Likewise disaster managers should also be made aware of the advantages of using engineering expertise in risk mitigation or management solutions."

To find out more about the ongoing relief effort in North Pakistan and the MSc in Earthquake Engineering with Disaster Management, or UCL's global perspective, use the links at the bottom of this article.

Images: Scenes of destruction in Pakistan after the October 2005 earthquake