Cruel to be kind is the recipe for survival

In a new research paper, evolutionary biologist Dr Max Reuter (UCL Biology) looks at how individuals who are cruel to their neighbour are ultimately being kind to their relatives. 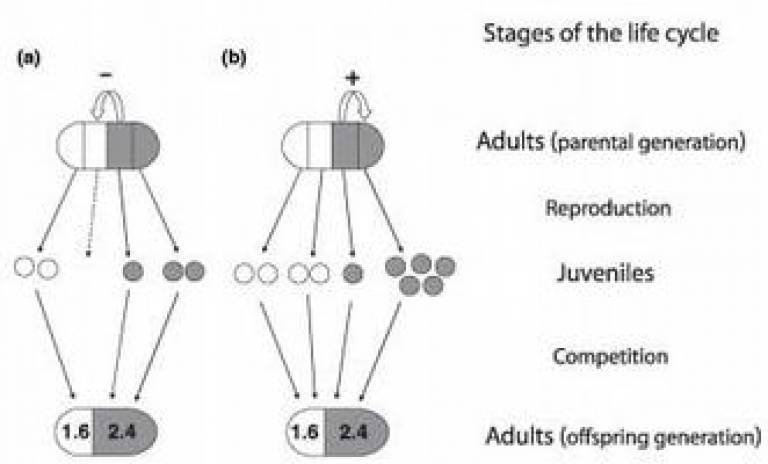 Published in the September 2006 issue of the 'Journal of Evolutionary Biology', Dr Reuter, with colleagues Dr Laurent Lehman and Dr Katja Bargum (University of Helsinki), explains that the evolution of social traits that are harmful or spiteful to non-relatives prove to also be altruistic to their relatives by improving their chances of survival and reproduction.

Dr Reuter said: "Biologists have always separated spite and altruism as two different traits - either you are nasty to non-relatives or nice to your relatives - but they are actually the same. If you take a sample of adults and one family does well, somebody else has to do badly. If you help your relatives eat more quickly, it leaves less food for the competition. For example, bacteria on a piece of food have a limited food supply, so they produce toxins that are poisonous to other bacterial strains. Although this strategy is costly in terms of the energy expenditure required, it will be favoured because it increases the relative abundance of the poisonous strain by eliminating competing bacteria."

A gene that causes an individual to spend their time being nasty to others means less time reproducing - so it doesn't make sense that a spiteful gene should spread. Dr Reuter explains: "Ants are a great example of this. The worker ants are the daughters of the queen. If the queen has mated with a single male, all the daughters are very closely related because they share an identical paternal genome. Because of this high relatedness, the workers prefer to rear new sister queens rather than less related males, and in many species have been shown to kill off the males. This behaviour is an example of both altruism and spite, because workers are doing something really good for their sisters, but really nasty to their brothers."

As illustrated by the ant example, altruism and spite are both implicated in the evolution of social acts that are costly for the individual that displays that trait - the actor. Dr Reuter said: "It's not a question of whether behaviour is spiteful or altruistic, but whether a social act promotes a gene lineage by augmenting production or reducing competition - helping or harming. This insight should help us understand the evolution of social interactions."

Image: Two populations, each with four adults initially producing two juveniles, are experiencing a social action where (a) a white individual is harmed and (b) a grey individual is helped. The act of harming or helping result in a cost of one offspring to the grey actor. The harmed individual produces no offspring, whereas the helped individual produces five offspring instead of two. From each parental population, four juveniles survive competition to form the offspring generation. Both types of interactions result in exactly the same evolutionary consequences. Both harming the white group and helping the grey group leads to the grey group increasing in frequency and the white group decreasing in frequency in the population. The total effect of the actor on the fitness of all individuals in the population sums up to zero.