UCL academics are among an international team of astronomers who have revealed new results on the cosmos, based on the largest map of the heavens ever produced. 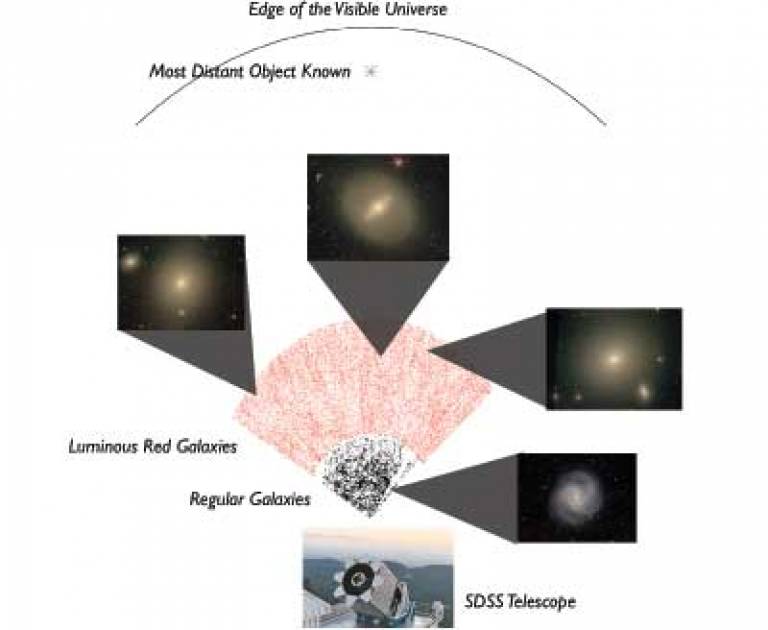 The massive atlas emphatically confirms recent findings that the universe is full of 'dark energy', a mysterious substance that makes up three-quarters of our universe, together with 'dark matter', which accounts for most of the remaining quarter. Understanding this composition is now one of the most important problems facing the whole of science.

"We now have a precise view of what makes up our universe, but little idea as to why," said Professor Ofer Lahav, a member of the international team and the Head of the UCL Astrophysics Group. "It is intriguing that the ordinary matter our bodies are made of and that we experience in everyday life only accounts for a few per cent of the total cosmic budget."

The new cosmic map is the largest to date - a three-dimensional atlas of over a million galaxies spread over a distance of more than five billion light years. "We have analysed the patterns in this map and discovered waves of structure over a billion light years across," said Dr Chris Blake (University of British Columbia), principal author of the study. "These waves were generated billions of years ago and have been vastly stretched in size by the expanding universe."
Construction of the cosmic atlas was led by co-author Dr Adrian Collister (University of Cambridge), using a novel Artificial Intelligence technique he developed with Professor Lahav.

"By using very accurate observations of just 10,000 galaxies to train the

computer algorithm we have been able to estimate reasonably good distances for over a million galaxies," said Dr Collister. "This novel technique is the way of the future."

By measuring the positions of galaxies, astronomers can unravel the balance of forces that govern our universe: the force of gravity which pulls everything together, and the competing effect of the expanding universe which smoothes things out. These cosmic forces have arranged the galaxy distribution into a complex network of clusters, filaments and voids.

"The galaxy map can tell us the amount of ordinary 'baryonic' matter relative to the amount of mysterious 'dark matter'," said co-author Dr Sarah Bridle (UCL Physics and Astronomy). "We have confirmed that over 80 per cent of the material in the universe consists of an invisible dark matter whose nature is not yet understood."

The cosmic atlas of a million galaxies will shortly be made freely available on the World Wide Web for the benefit of other researchers. This free exchange of data is an important feature of modern astronomy, since many discoveries are only possible when different observations are combined.

The key problem in mapping the cosmos is determining the distance to each galaxy. Researchers can measure these distances because as the Universe expands, the colour of each galaxy changes as their emitted light waves are stretched or 'redshifted'. Traditionally, astronomers have needed to take a spectrum of each galaxy to determine this distance, splitting its light into many components to reveal sharp features with which to measure the amount of redshifting. This requires a time-consuming, individual observation of each galaxy.

The new cosmic map has been constructed using a novel technique focusing on a special class of galaxy whose intrinsic colour is very well known. For these 'Luminous Red Galaxies' researchers can measure the amount of colour distortion, and hence the approximate distance of the galaxy, just by looking at digital images of the sky, without the need to obtain a full spectrum.

These techniques will be very important for future large astronomical projects such as the US-led Dark Energy Survey, scheduled to start in 2009, in which UCL and the universities of Portsmouth, Cambridge and Edinburgh are key partners.

The research by the UCL astronomers was partly funded by the UK Particle Physics and Astronomy Research Council and the Royal Society. The findings are presented in the Monthly Notices of the Royal Astronomical Society.

To find out more, or read the full paper, use the links at the bottom of this article

Image: An illustration of the map, with each red and black dot representing a galaxy