UCL has been awarded a Bronze Athena SWAN Charter, a recognition scheme for UK universities and their science, engineering and technology (SET) departments, which aims to assist the recruitment, retention and progression of women in SET. 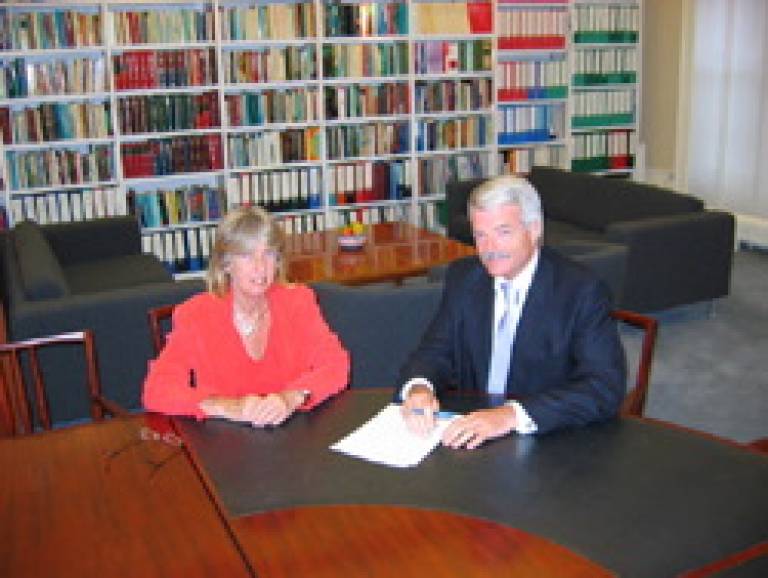 UCL were presented with their SWAN Charter at the Royal Society. Lord Rees of Ludlow, President of the Royal Society presented the award at a reception after the third Royal Society Public lecture, given by Professor Dominque Langevin, CNRS Directeur de Recherches at the University of Paris-Sud who described her pioneering work on surfactants, special types of molecules that change the properties of liquid surfaces.

A photographic exhibition of pioneering and inspirational women in science launched on international women's day, 8th March, by the UK Resource Centre for Women in SET, was also on display.

The award is a follow up to the nationwide Athena Survey for Science, Engineering & Technology (ASSET). At UCL, 493 men and women academics working in the fields of science, engineering and technology - including medicine, dentistry, architecture and computer science - participated, the highest number of any UK university.

Professor Malcolm Grant, President and Provost of UCL, is championing Athena at the university, with Professor Jan Atkinson (Psychology and Pro-Provost for North America), of the Equal Opportunities Committee, acting as UCL's Athena contact and coordinator.

Professor Grant commented on the charter: "I am very pleased we have been awarded a Bronze Swan Charter. This recognises our work to uphold and promote the principles of Athena for advancing the careers of women in science, engineering and technology. This continues our long and unique tradition in recognising diversity.

"Inevitably, gender balance varies widely with grade and across disciplines, but we have overall a relatively good gender balance, notably in biomedical research which is one of our areas of strength. We have many women at the top of their research professions, and we aim to support our women in moving to the top, and in taking leadership roles.

"Our Bronze Charter is a starting point. I am committed to promoting the working groups, started by Jan Atkinson to set up initiatives to promote equality throughout department initiatives, helped by the Equal Opportunities Officer - Fiona McLean - and the team in UCL Human Resources, so that individual departments may be chartered and that UCL as a whole will eventually achieve Gold recognition for the careers it offers equally to both men and women."

Professor Atkinson commented on the charter: "I am delighted that UCL has been awarded this SWAN Charter and hope that with continuing effort we may move towards Silver and Gold awards in the future.

"With the support of the Provost, and with help from Caroline Fox from Athena, we joined in the ASSET survey in 2004, with a record number of responses, UCL providing approximately 25 per cent of the replies from all universities nationally. We have two teams who worked on the SWAN submission and will carry new initiatives forward. These are the Athena Advisory Group of senior academics and Human Resources staff, and the SWAN Self Assessment Team, representing all levels from postdoc to professor in Science Engineering and Technology, which in UCL includes biomedicine, computer science, architecture and the built environment.

"UCL is a particularly significant institution for Athena's national campaign. Around 70 per cent of its research funding is in SET areas, making UCL one of the largest employers of SET academics in the UK. Out of a total of over 19000 students, 7282 undergraduates and 4776 postgraduates study in UCL's SET faculties and institutes.

"It has been hard work getting to this point, especially since many of us have had to combine it with the demands of preparation for the RAE. It is now our job to carry new initiatives forward so that gender equality, across the whole range of disciplines and levels in UCL, becomes part of our natural academic culture."

To find out more, use the link at the bottom of the article.

Image 1: Professor Grant and Professor Atkinson signing up to the Athena SWAN Charter