A cross-party delegation of US Congressional representatives visited UCL on 1 June 2006 to find out more about UK stem cell research. 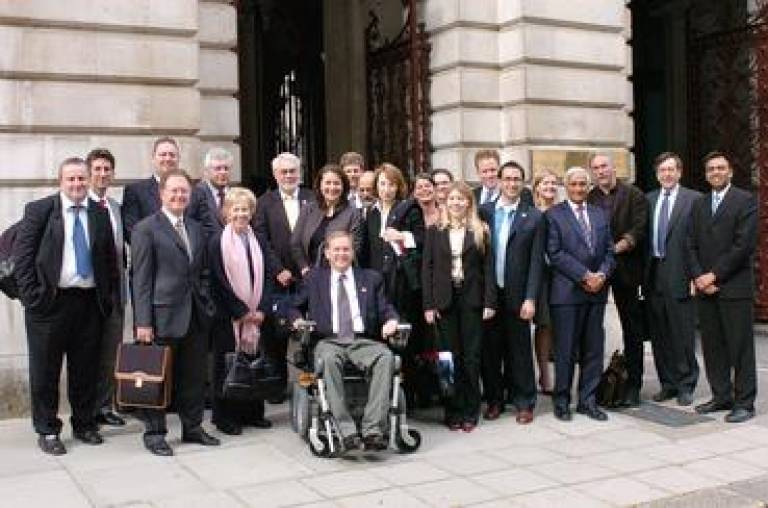 The delegation, which included the Honourables Mike Castle, Diana DeGette, Jim Langevin and Dr George Atkinson, Science Advisor to the US Secretary of State, visited the UK to discuss issues relating to the use of stem cells in research with ministers, government departments, regulatory agencies and scientists.

They were interested in seeing how, in this most sensitive of areas, the needs of biomedical scientists requiring access to human embryonic stem cells were balanced with the concerns of the general public. In particular they wanted to learn more about how the UK's policy on cloning and stem cell research had been determined and how it might inform future legislation in the USA, which currently at the federal level, has a radically different approach.

UCL scientists, Professor Claudio Stern (UCL Anatomy and Developmental Biology) and Professor Pete Coffey (UCL Institute of Ophthalmology) together with Professor Robin Lovell-Badge (National Institute for Medical Research) were part of a small group who met the delegation at the Foreign and Commonwealth Office on 1 June 2006.

Professor Coffey reported on the great strides being made by his group at the UCL Institute of Ophthalmology applying stem cell technology to help restore vision in patients suffering from macular degeneration. The macula is responsible for colour and detail vision, the degeneration of which leads to blind spots that reduce central vision.

Later in the day, the US team visited the UCL Institute of Neurology to see at first-hand Professor Geoff Raisman's ground-breaking research using stem cells to treat spinal injury.

Image 1: A party including UCL representatives welcomes the US delegation to the Foreign and Commonwealth Office

Image 2: Professor Raisman explains his research to Congressman Jim Langevin at the UCL Institute of Neurology