A memorandum of understanding (MOU) was signed in June 2006 by UCL's President and Provost, Professor Malcolm Grant, and Osaka's Mayor, Junichi Seki, with respect to collaboration between UCL and Osaka City University (OCU). 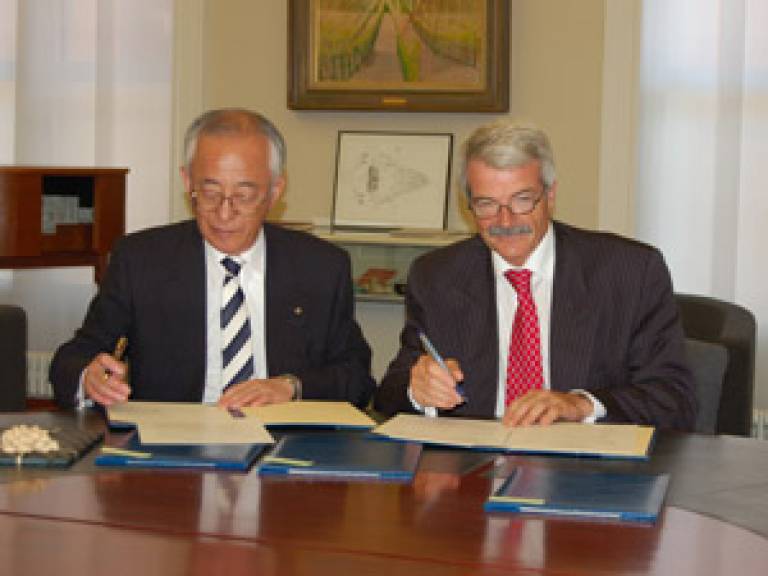 The MOU recognizes the significant scholarly exchange already underway between the two universities in the areas of vision science, cognitive neuroscience and anatomy, and paves the way for enhanced interactions in these specific areas. The MOU details future efforts to enhance scholarly exchange between the two universities in the form of research collaborations and exchange of students and academic staff.

This interaction stems from a meeting between Mayor Seki and Professor Grant two years ago, where the two discussed how to form global links between universities in Osaka and UCL. Since that time UCL has now completed MOUs with both Osaka University and OCU, two leading universities in the Kansai region of Japan.

In November 2005 the first joint forum between UCL and OCU was held in Osaka. Around 300 people, including government officials, CEOs and other senior management from pharmaceutical companies, attended the event. Professor Santa Ono (UCL Institute of Ophthalmology) and Professor Semir Zeki (UCL Anatomy & Developmental Biology) spoke at this forum, together with other scientists from OCU. This forum was followed by visits by OCU professors Yasuyoshi Watanabe and Hiroshi Kiyama to UCL.

The significant interactions between UCL and these institutions further cements the long history of interaction between UCL and Japan, including the education of two Japanese Prime Ministers at UCL (Hirobumi Ito and Junichiro Koizumi) and corporate interactions with Eisai Pharmaceuticals and Hamamatsu Photonics.

To find out more about UCL's links with Japan, use the link at the bottom of this article.