A team of UCL scientists has developed a new biomaterial for use in medical devices for applications including, among others, bypass grafts, liver transplants and plastic surgery such as cartilage growth, face transplants and breast implants. 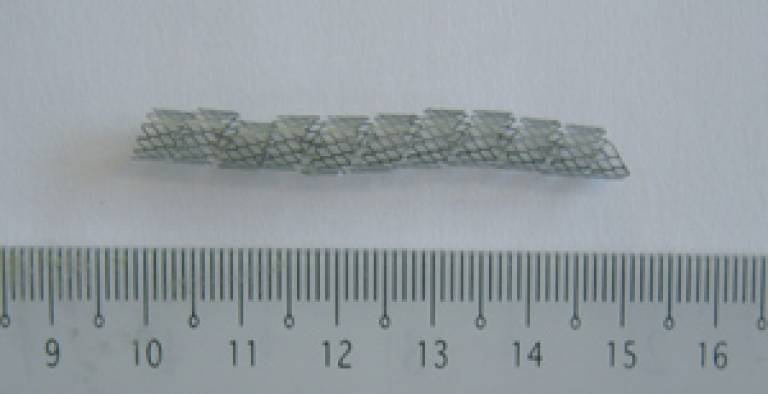 In two recently published articles in the journals 'Biomaterials' and 'Biomacromolecules', the team claims its material is superior to any existing materials in the field and offers great potential for the development of human organs with the aid of stem cell technology.

The articles - 'Polyhedral oligomeric silsequioxane-polyurethane nanocomposite microvessels for an artificial capillary bed' (Biomaterials) and 'The antithrombogenic potential of a polyhedral oligomeric silsesquioxane (POSS) nanocomposite' (Biomacromolecules) - reflect the latest breakthroughs from the UCL team, whose ongoing work is funded by two Engineering & Physical Sciences Research Council (EPSRC) grants made this year. The first, from the EPSRC Healthcare Engineering Panel, is a three-year programme worth £200,000. Working with Professor Philipp Bonhoeffer, Chief of Cardiology and Director of the Cardiac Catheterisation Laboratory at the UCL Institute of Child Health, the team aims to develop a new prototype working design of a heart valve for use in children. It is hoped that in vivo trials and possibly limited clinical trials can start at the end of the project.

The key material for this application is a unique biocompatible nanocomposite developed by Professor Alex Seifalian and his team at the Biomaterials & Tissue Engineering Centre, UCL Surgery, which will be processed and formed using electrohydrodynamic jetting in the Bio- & Functional Materials Processing Laboratory at UCL Mechanical Engineering, under the guidance of Professor Mohan Edirisinghe. The process will be evaluated using models developed in the cardiac catheterisation laboratories of Professor Bonhoeffer.

The second grant was awarded by the EPSRC Engineering Functional Materials Flagship Programme and is a four-party collaborative research project led by UCL and involving Oxford University, the University of Manchester and Imperial College. The five-year grant, totalling £1.1m, is to fund investigations into stents (a medical device that is placed within an artery or vein to keep it open) made of new functional nanocomposites. The grafts will be made from either shape memory alloy with nanocomposite coating, or entirely from a radio-opaque shape memory nanocomposite.

Successful delivery of the programme will lead to the development of a stent that has significant advantages over existing devices including geometric simplicity, a more reliable expansion mechanism, higher radial strength, the ability to shape the structure to the artery, and better biocompatibility with both blood and tissue.

In addition, commercial funding supports a number of other of the team's projects, including the development of a coronary artery bypass graft, which is currently being evaluated in vivo and is expected to undergo clinical trials in 2007-08.

Image: A mesh stent made from the UCL team's new biomaterial