The 2005 Murie Robertson Award for Outstanding Contribution to Alumni Activity at UCL has been presented to Ewan MacLeod (UCL SLAIS 1999). 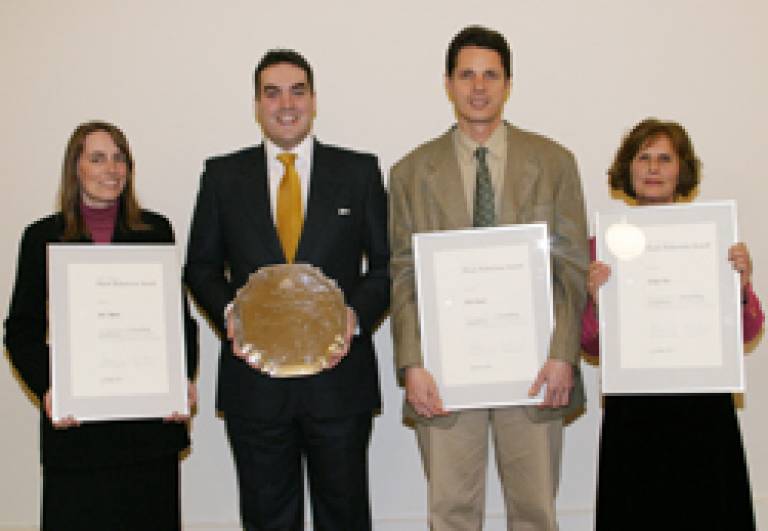 In addition to the award, six inaugural Murie Robertson Certificates were awarded to alumni by the President and Provost of UCL, Professor Malcolm Grant.

Ewan has been a key supporter of UCL's move into electronic communication with alumni. His contribution over the last six years has included giving advice on the alumni website and on email communication, conducting careers talks with current students, and speaking at the Edinburgh alumni dinner, as well as at a panel discussion at the 2004 UCL Alumni Open Day. Ewan exemplifies the enthusiasm and dedication of alumni volunteers.

Helen, who is Departmental Administrator of UCL History, plays a key role in running the UCL History Alumnus Association - she is honorary treasurer and has been joint editor of its annual newsletter.

Christine was instrumental in establishing the UCL Women's Dining Club Scholarship for UK Undergraduates, and in increasing the number of scholarships awarded each year.

Mark has been involved with the UCL Bentham Boat Club for alumni rowers since 1988, and has taken on a number of key roles in the running of the club.

Leonard has supported UCL International Office activity in Singapore since 2001, has been Secretary of UCL Alumni Singapore and was a driving force behind the organisation of alumni recent events in Singapore including the 'Pagoda Street' reception in 2005.

The UCL Hong Kong Club was formed in the 1970s and is one of UCL's most active and prestigious international alumni groups. Hong Kong holds the largest number of UCL alumni in Asia, and the club provides vital links between UCL and alumni in the region, in part through organising two to three alumni events a year.

Ewan and Mark are also two of the nine UCL Alumni Association Advisory Board Members, drawn from the most active and prominent UCL alumni.

The awards are a lasting tribute to Murie Robertson (UCL Geograpy 1953), who was a keen and active volunteer, working closely with the UCL Alumni Relations Team, especially to establish links with alumni in Australia. Following his death in 2000, the award was established in his memory.

To find out more about opportunities for alumni involvement, use the link at the top of this article.