Get Your Kit On!

UCL students from over 30 societies turned up to lectures in a variety of outfits - from tutus and rugby gear, through to traditional national costumes from around the world - in order to mark Get Your Kit On, a day organised by the UCL Union to raise awareness of UCL's numerous clubs and societies. 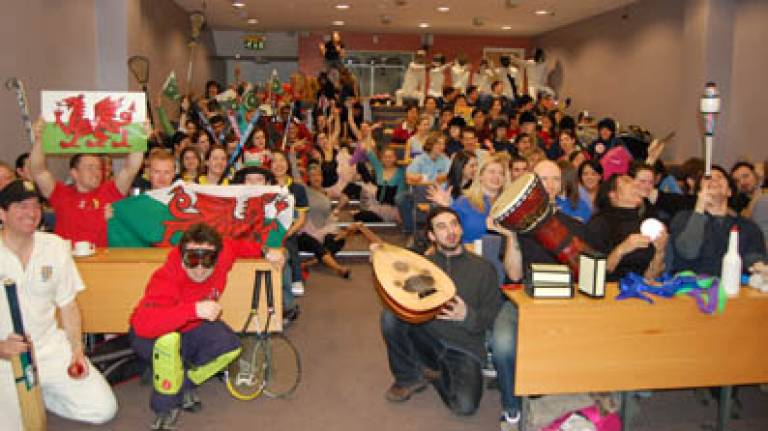 Held on 8 February 2006, and organised by Natasha Davis, UCL Union Clubs, Societies & Student Development Officer, the day aimed to raise awareness about the 140 clubs and societies that UCL students can join, as well the wide range of activities that students can partake in. Natasha explained: "It is important to recognise that taking part in extracurricular activity is part of university life and this should be encouraged for all students. It is not only an opportunity to meet new people, take up a hobby, or pursue an interest - taking up extracurricular activity also enhances skills that employers are seeking more of."

The Women's Rugby Society, which meets twice a week for matches and holds regular themed Wednesday night socials, is always happy to welcome new members. Budding women's rugby players need no qualifications but their enthusiasm, explained captain Tien Tien Tan: "We play 15-a-side games, so the club would be seriously under threat without plenty of members. Schools don't tend to offer women's rugby, so most women come to us without experience."

'Balls', the UCL Union's circusing, juggling and unicycling aociety, meets up on Mondays, and recently put on a show, 'Balls for balls' to raise money for testicular cancer. Chris Binny, unicyclist member of Balls, said: "We meet up to practice, exchange experiences and learn new tricks."

The Pakistan Society is just one of 30 UCL societies focused on the culture of a particular country around the world. President Kabeer Asim explained: "We have a number of fundraising events, at the moment focused on raising aid money for the recent south east Asian earthquake. Treasurer Samra Kamar added: "The Pakistan society aims to spread awareness of our culture, and we do lots of fun stuff - for instance, we recently had a 'girls only' belly-dancing meeting."

The Welsh Society is one of the UCL Union's most recently founded and fastest growing societies, with pub-crawls, regular trips to Wales and naturally a tie-in with the rugby, including free tickets to London-Welsh rugby, explained president Zoe Davies.

The Dance Society offers its members a structured series of events, dedicating the first term of every year to a series of dance classes in disciplines as diverse as jazz, tap, ballet and hiphop, then joining up with the Salsa Society to choreograph and stage an annual show at the UCL Bloomsbury theatre. Charlotte Green, website coordinator for the society, commented: "This year is the 20th anniversary show (running from 9-11 March 2006) - so it will be particularly spectacular."

Another society to stage a big show this year was The UCL Union Fashion Society, Modo, which presented its 'Fairytales and Fantasies Show' in February 2006 to a delighted audience.

Image: UCL students get together for Get Your Kit On!