The UCL Petrie Museum of Egyptian Archaeology has given an 11-year-old schoolgirl a head start in her quest to become an Egyptologist. 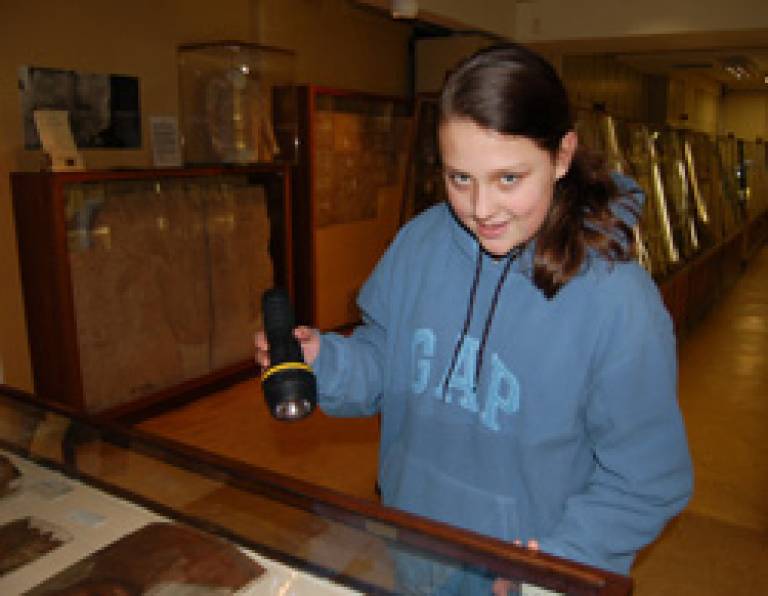 Jemma Wood, a Year 6 pupil from Hernhill Primary School in Faversham, Kent, was given a guided tour of the world-renowned museum in February 2006 after UCL's Provost and President, Professor Malcolm Grant, read about her passion for the subject in 'The Guardian'.

Jemma first became fascinated with ancient Egypt after studying the period in Year 3 and has since gone on to read all she can about the subject: "I particularly like Cleopatra because she was one of the strongest women in the world and she also met a nasty end after she got bitten by a snake" explains Jemma.

As part of her tour, Jemma was shown one of the oldest dresses in the world, ancient jewellery and a series of mummy portraits. The portraits date from the late 1st century BC - a period Jemma is particularly interested in - and were painted while the subjects were still young to be later placed on the faces of their mummified remains. "They're really beautiful paintings and you get a real sense of who the people were from them. You can tell some were richer than others by the amount of jewellery they wore", enthused Jemma.

Despite distracting forays into the Roman period in Year 5 Jemma is determined to be a professional Egyptologist after she finishes university. Her plan is to study archaeology at UCL and visit the pyramids in Egypt, and she is also keen to take up museum manager Hugh Kilmister's offer of work experience at the Petrie Museum, which has an extensive schools outreach and education programme.