Professor Roger Ekins, FRS, past Head of UCL Molecular Endocrinology, has been presented with the Department of Health's Lifetime Achievement Award. 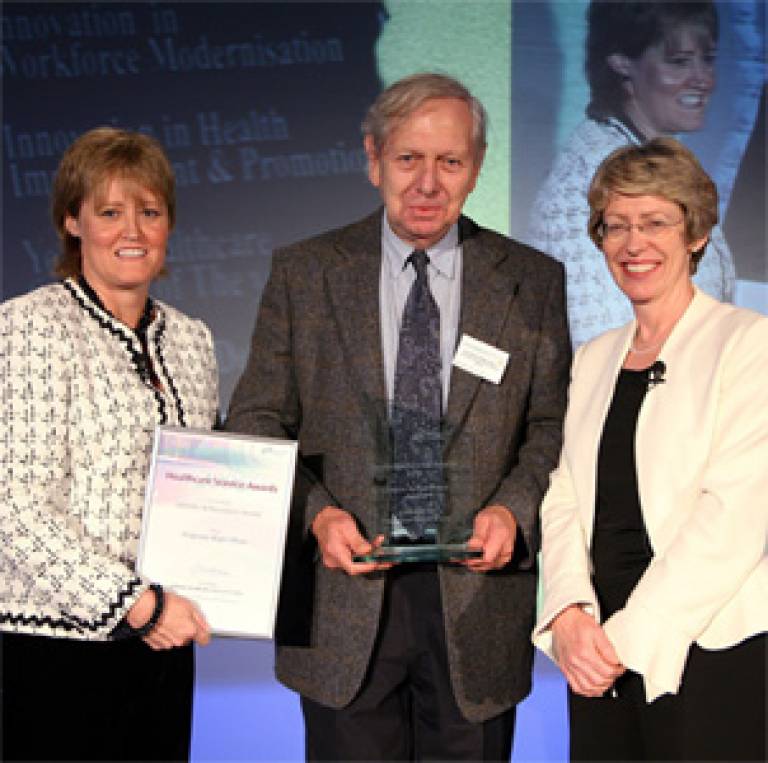 This is the first such award to have been made by the DoH. Professor Ekins is internationally recognized as the independent co-originator of radioimmunoassay and related 'ligand assay' methods. His development of these methods arose as a by product of his interests in endocrinology; in particular, his proposed existence of mechanisms that underlie crucial (but previously unsuspected) effects exerted by maternal hormones on the early development of the fetal brain.

His first publication in the ligand field was in 1960, relating to the assay of serum thyroid hormones (a lack of which is often associated with goitre (swelling of the thyroid gland), but which are also implicated in various forms of cretinism). He has received many national and international awards for his work in the ligand assay field. Such assays are used worldwide for diagnostic purposes in almost every branch of medicine, ranging from routine diagnostic tests for thyroid function in all newborn infants to tests for viral diseases such as AIDS.

These make up half of all diagnostic tests used by chemical pathologists and are the mainstay of a $10 billion dollar immunodiagnostics industry. In 1973, Professor Ekins launched (together with Professor J Landon of St Bart's) the Supra-regional (hormone) Assay Service, his lab being one of the seven university-based research laboratories funded by the DHSS to offer specialist testing in this area to doctors and hospitals throughout the UK (before commercial assay kits and instruments became available).

In the mid-1980s, he conceived of a revolutionary 'multianalyte' assay methodology (now referred to microarray or biochip-based assay technology) that is now transforming research in the fields of DNA and RNA analysis, immunoassay, genomics and proteomics, and estimated by market analysts to reach $40 billion p.a. in the next few years. This miniaturised technology permits the simultaneous, ultra-sensitive, measurement of thousands of different substances of biological importance (such as hormones, proteins, viruses, genes) in a single drop of blood. The technology has opened the door to the next revolution in diagnostics and to the widely predicted era of personalised medicine and targeted treatments.