Five of the ten projects selected for this year's Architecture Foundation Best in Show exhibition are by UCL Bartlett students. 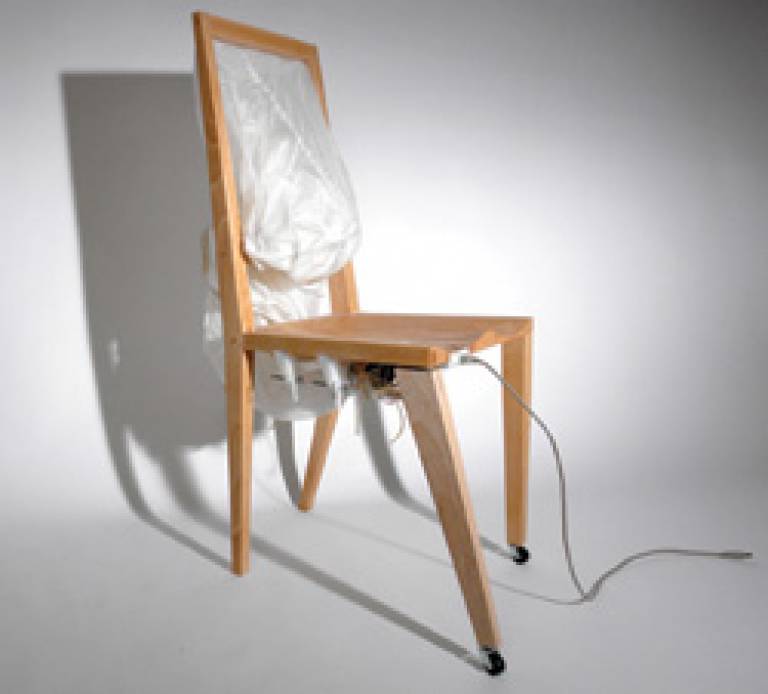 The exhibition, on display until 2 September 2006 features projects by London architecture students which consider communication and presentation as an integral part of the architectural research and design process.

Toby Carr's project 'The Anxious Lounge', investigates the way that active furniture might share space with people. Toby's work is an extension of his paper 'Emergent Voyeurisms in the Performative Space of Architecture and Cinematography' in which he explores interactive environments by comparing these with hyper-real structures found in Bertolt Brecht's plays.

'The House of Obstacles and Invitations' by Sebastian de la Cour considers a recognisable model of a homely house with familiar features taken from Victorian interiors. These are subsequently placed in foreign terrain, in the city of Venice. The house overturns daily routines and commonplace thoughts, and its rooms embrace abuse, misuse and confusion. They form an architecture where order is broken by anomalies, an architecture where the elements are inconsistent and equivocal rather than direct and clear, with the inherent idea that truth can coexist with deception. The house becomes a challenging reality and with its ambiguous literalness becomes a space of reflection for both the inhabitant and the visitor.

Ian Laurence and Karl Normanton's joint work, 'The Graduation' is a complex and subtle series of projects that explore the relationship between architecture and performance. Drawings, maquettes and full-size installations, including gigantic costumes, are used to see how far objects can tell a story and define a space.

Cynthia Leung's 'Postcards from Dorothy' gets its inspiration from Dorothy's ruby shoes in 'The Wizard of Oz' and is a personal interpretation of the high heel shoe and the meaning of home, which for Cynthia, is synonymous with travel. The architecture, sited in the heart of Hong Kong, is a subtle intervention composed of openings in the landscape and intimate spaces below ground. It becomes an integral part of the urban fabric, creating a new public meeting place for women travellers, where femininity is expressed, and dialogue, contemplation and inspiration are facilitated.

'G.U.L.L.I.V.E.R' by Joerg Majer is an organisation that continually reinterprets the information found in the 'Old Archive'. In 1909 an expedition through an apparently unknown and unrecorded area discovered what is today known as the 'Old Archive'. Originally founded by Sir John Soane in 1707, the 'Old Archive' is a collection of evidence from an event that took place several hundred years ago. On the 5 November 1699, Lemuel Gulliver was found shipwrecked. One interpretation of this event puts Gulliver at 2000 times larger than a man, so large that he is perceived as a strange land mass and explorations are immediately begun. But when Gulliver gets up and leaves, having slept for a day and night, all explorations stop and all that remains is fragmented information: maps of the area, inventions, artist's impressions, calculations and other written accounts.

For more information on the exhibition, use the link at the bottom of this article. Projects by these and other Bartlett students can also be found in the Summer Show Catalogue 2006, which can be purchased at the Bartlett or by contacting Emma Kirkman on +44 (0)20 7679 4642.