Lord Woolf to give Icebreaker Lecture

UCL alumnus Lord Chief Justice Woolf will give the annual Icebreaker Lecture on China, entitled 'The Developing Priority of the Rule of Law in the Chinese Economy' on 28 September 2005 at Merchant Taylor's Hall, London. 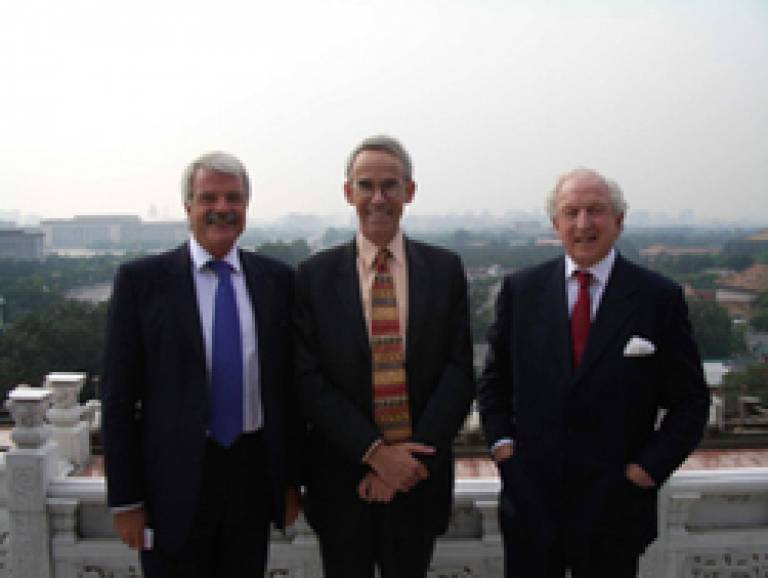 Lord Woolf will give the lecture on his return from China where he discussed the role of the rule of law with China's leaders. Accompanied by UCL's President and Provost, Professor Malcolm Grant, and the Dean of the Faculty of Laws, Professor Michael Bridge, he explored approaches to enhancing UCL's global law programme in China, in partnership with leading universities. Co-organised by UCL and the 48 Group Club with sponsorship from Linklaters and in association with Asia House, the lecture will discuss his visit and his perceptions of China's transition to a rules based economy followed by a Q&A session Chaired by Martin Broughton, Chairman of British Airways. Lord Woolf has delivered a great number of lectures on the Chinese legal system and this will be his last one before stepping down as the Lord Chief Justice.

The development of the Chinese economy is well advanced with an annual growth rate of nine per cent, and the issue of how to regulate a modern world scale economy is critical. China recognises that it needs laws to govern all aspects of its society. The rule of law promotes stability and continuity. It provides society with transparent procedures to redress grievances and provide neutral and independent solutions and is an invaluable asset to the rapidly emerging China.

While in China, Lord Woolf held a symposium in the Great Hall of the People of the Republic of China in Beijing, on the theme of the rule of law, and its importance in underpinning and advancing national economic growth.

Lord Woolf, who will become chair of UCL's governing body at the end of the month, spoke of the importance of legal education and particularly its contribution to securing qualities of independence in the judiciary. He also outlined some of the 'Woolf' reforms to the system of civil justice in England and Wales and their contribution to the speedy and inexpensive resolution of disputes.

The 48 Group Club - also known as 'The Icebreakers' - is a network of business people and government figures who promote good relations in Sino-British trade. Asia House is a charitable organisation that promotes appreciation and understanding of Asian countries, their arts, religions and economies, and to foster closer communication between the peoples of Asia and Europe.