Cardiology at the limits

Cape Town was the best place to suffer a coronary in April 2005, as around 150 of the world's foremost cardiologists gathered there to attend 'Cardiology at the Limits,' the annual symposium of the Hatter Institutes for Cardiovascular Studies at UCL and the University of Cape Town (UCT). Chaired by UCL's Professor Derek Yellon and by UCT's Professor Lionel Opie, the meeting was formally opened by the Vice Chancellor of UCT, Professor Njabulo Ndebele and the President and Provost of UCL, Professor Malcolm Grant.

The symposium attracted a number of high profile international figures, including winner of the Nobel Peace Prize Bishop Desmond Tutu as a guest speaker. Professor Yellon, Director of the Hatter Institute and Head of the Centre for Cardiology said: "This is an initiative designed to establish international development and collaboration between these two institutions both of which have an international reputation in the field of cardiovascular research. These symposia have attained a unique place in cardiovascular medicine, not only attracting the world's best clinical and basic scientists, as guest speakers, but also addressing the major topics affecting the broad scope of cardiology." 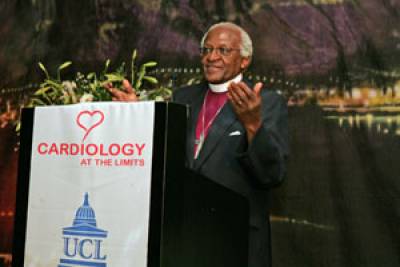 Founded in 1990, the Hatter Institute promotes greater understanding of cardiovascular disease and aims to develop new therapies for the improved treatment of heart disease. Professor Yellon (originally from Cape Town) was instrumental in creating a second Hatter Institute at UCT called the Hatter Institute for Cardiology, of which he is also a co-director.

Professor Yellon said: "Since 1990, UCL's Hatter Institute has established an international reputation for research into cardiovascular disease. The creation of a sister institute at the University of Cape Town ensures greater collaboration on research and training, so that expertise can be shared and ideas developed together as a team."

The 'Cardiology at the Limits' series organised by Professors Yellon and Opie is considered to be one of the premier events in the cardiology calendar, contributing overall to a greater understanding of cardiovascular disease.

"It's a real privilege to be able to select and include cutting edge research and technology from around the world that is so new that, in many cases, it has not yet been presented at the larger international meetings," said Professor Yellon. "Our colleagues who gather in Cape Town year after year are the most eminent in their field and, for all of us at this level, to have the opportunity to debate the potential implications of the latest cardiovascular advances is tremendously valuable."

To find out more about the symposium or the institutes use the links below.