Mr Dobson was shown the FIL's new MEG brain scanner by Professor Ray Dolan, Head of the Wellcome Department of Imaging Neuroscience in UCL's Institute of Neurology (IoN). Dr Ben Seymour explained some recent advances in research on pain at the IoN. Mr Dobson then met with three young researchers - Dr Sophie Scott, Ms Suparna Choudhury and Ms Disa Sauter - who described their work in fields as diverse as comprehension of non-verbal vocal communication in tribal people in Namibia, diagnosis of Asperger's syndrome and changes to the empathy functions of the brain during puberty and adolescence. 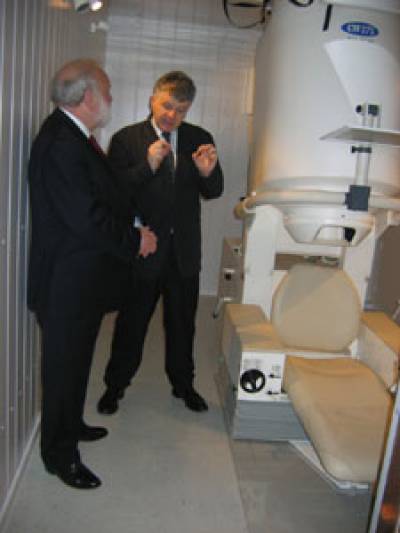 The Director of the ICN, Professor Jon Driver, then discussed the ICN's role as an interdisciplinary research institute, studying how mental processes relate to the human brain, in health and disease, for adults and children. He described the ICN's thriving "mixed culture", forming an interface which brings together specialists ranging from psychologists to physicists, and mathematicians to neurologists. The ICN links include those with the UCL departments of Anatomy, Human Communication Science and Psychology, and the IoN; it also has close collaborative links with its neighbours in Queen Square, including the Wellcome Department of Imaging Neuroscience, the Gatsby Computational Neuroscience Unit, the Institute of Movement Neuroscience and the National Hospital for Neurology & Neurosurgery.

Mr Dobson then met Dr Paul Burgess (ICN and Psychology), who studies the "executive functions" of the brain such as concentrating, planning and multitasking. Finally, Dr Richard Sylvester explained to Mr Dobson a promising new development for the rehabilitation of stroke patients with a particular disorder called "neglect", who are able to perceive only one side of the world around them.

Established in 2001, the Scientists & Parliament scheme aims to build bridges between some of the best research workers in the country and members of the UK parliament. To date more than 80 scientists and MPs have taken part. The scheme includes a briefing by the Royal Society, a week in Westminster, and reciprocal visits to the constituency office and the laboratory. Its aims include giving MPs the opportunity to forge direct links with a network of practising research scientists, to familiarise themselves with the process of scientific understanding and topical research, and to be able to bring this knowledge into better informed discussions and decision-making.

To find out more about the ICN, Dr Blakemore or the Royal Society use the links below.