On the eve of Beslan

A UCL academic who met with Russian president Vladimir Putin during the Beslan crisis has talked about his experiences. 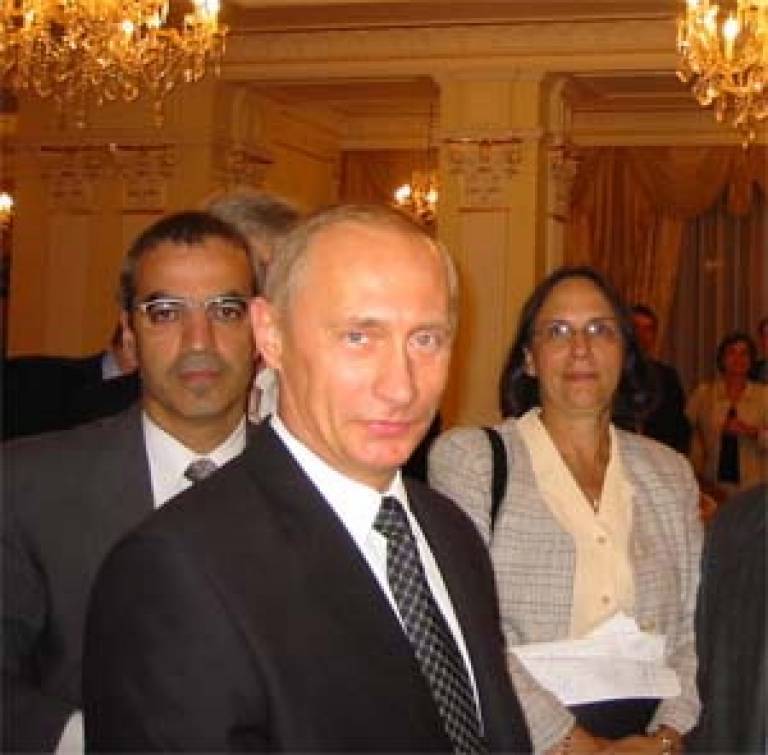 Dr Mark Bassin (UCL Geography) was invited to visit Russia as part of a select group of UK and USA Russia specialists, including academics, international affairs journalists and Russian think tank analysts, in order to attend the Valdai Discussion Club, a week-long conference which ran in Novgorod and St Petersburg.


Dr Bassin's main interests are in cultural and political geography, and his work has focused on the symbolic role of space and nature in the construction of nationhood and national identities, particularly in Russia, Germany and the United States. He has a special interest in Eurasianism, a topic crucially important for Russia and the other former Soviet states as they redefine their relationships to Europe and the east.

The Valdai Discussion Club was organised by the Russian press agency Novosti to promote a more coherent image of Russia abroad by addressing such long-term 'Russia watchers' such as Dr Bassin. The conference brought together many members of the Russian economic and political elite to address the conference group, giving them new perspectives on Russia, which has not sought to give a unified 'state' account of itself since the fall of the USSR. But the highlight of the Valdai Discussion Club for the attendees was the promise of a talk with Russia's president.

However, while the events of the Valdai Discussion Club unfolded, a group of 32 gunmen were gathering together in the woods near the village of Psedakh in Ingushetia. On the eve of the group's scheduled talk with Putin, the gunmen took 1,227 people hostage at Beslan's Middle School One. In view of the circumstances, it seemed increasingly unlikely that the Russian president would really talk to the Westerners, said Dr Bassin. "We thought that there was no way that the meeting would happen under the circumstances."

But amazingly, the meeting went ahead as planned and at 8.45pm on September 6 2004, the group were invited in to a meeting room at President Putin's private residence at Novo-Ogarevo for a meeting which lasted nearly four hours. The president took around a dozen questions from the group, most of which concerned Chechnya and the Beslan crisis that was unfolding as the meeting went on.

Dr Bassin said: "Putin came into the meeting visually shaken by the events that were occurring. But despite this fact, he gave very detailed answers to all of the questions that were put to him through an interpreter. What was clear from his answers was that he took a very American approach to Chechnya - it was a case of 'these people want to hurt us and they have to be stopped.' He drew direct parallels between the Chechen rebels and America's dealings with Bin Laden, saying that he did not counsel the Americans to meet Bin Laden for talks."

Vladimir Putin did not acknowledge the political background to the Chechnya conflict, and neither did he accept that the Beslan crisis was related to events in Chechnya. "Putin was keen to emphasise the foreign presence in Beslan, and to portray it is a foreign terrorist attack. Of course, it emerged subsequently that this was not the case."

However, Dr Bassin was very impressed by Putin's immediate and fluent responses to the questions that were put to him - he needed no recourse to his political advisors and although he spoke through interpreters, he clearly understood English. Dr Bassin's one regret was that he couldn't ask Putin his own question: "I wanted to ask about Russia's relationship with its former Soviet states and how he understands the term "Eurasia", but there wasn't time."

Putin's meeting with the Valdai Discussion Club was widely covered in the Russian press, with some criticism that the president was explaining events to Western visitors while the situation was still unclear to his native Russia. And although some aspects of the president's take on events in Beslan to Dr Bassin and his colleagues were quickly disproved by subsequent reports, even today, six months after Beslan and following a criminal investigation, many questions about the crisis are still unanswered, said Dr Bassin: "What is certain is that meeting with Putin at this time while the Beslan crisis was still unfolding gave us a unique view of Russian politics at the crucial point in history."

Dr Bassin's current book is The Gumilev Mystique: Eurasianism, Ethno-Nationalism, and the Geopolitics of Identity in Modern Russia.

To find out more about his work use the link below.