Rock giants Coldplay, whose new album X&amp;Y looks set to top the charts, fondly remembered their time at UCL in a recent interview with Steve Lamacq on BBC Radio 2. 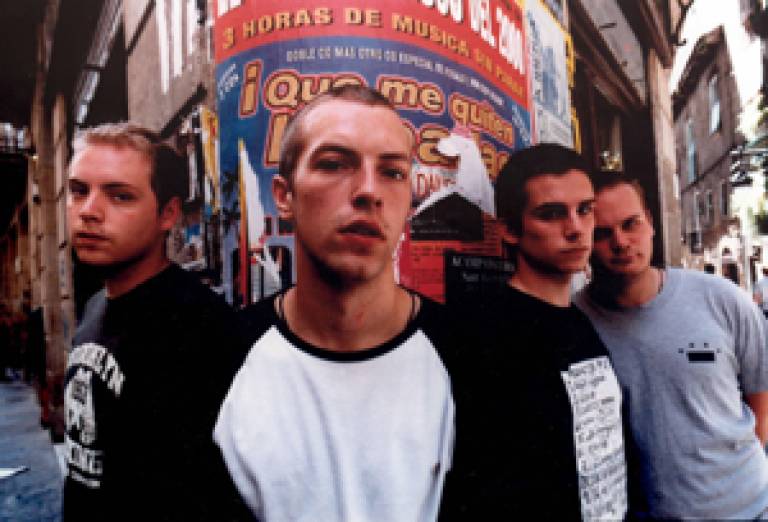 The band - Chris Martin (Greek & Latin), Will Champion (Anthropology), Jonny Buckland (Mathematics) and Guy Berryman, who studied at UCL for a year - met in UCL's Ramsay Hall in 1996.

For lead singer Chris, moving to London and starting at UCL was an incredibly exciting time: "I went to London like Dick Whittington looking for gold. I didn't have a cat but about 12 bags and my dad had to drive me there. I arrived at this big place called Ramsay Hall, Tottenham Court Road - brilliant - and I met Jonny and everything changed."

Ramsay Hall proved an ideal environment to compose the fledgling band's first tunes, recalls Will: "I remember in the first week or so people sitting around and playing music and I remember specifically jamming with Chris, there was amazing acoustics on this big stairwell and we just sat and played guitars and I remember one jam where I was on the very bottom floor lying down at the bottom of the stairs, and he was on the fifth floor - sort of like a five-floor musical experience."

"It's weird though, because the bloke who turned out to be the best guitarist out of all of us was the bloke who had his guitar hidden in his cupboard and who never got it out or was pushy about his guitaring. It was your man over there, Jonny. He was really quiet and timid; it was great because a lot of people were too pushy and too cool, and the people it turns out who were in the band were those who were just really passionate and not pushy."

As with so many other students, the halls of residence proved an ideal place to meet friends, said Guy: "We met each other because we were living in the halls of residence, it was like this block of rooms, everyone has their own room and downstairs was the bar and the pool table so everyone met in and around that area and people would introduce themselves to each other. I can remember meeting them all over a pint."