UCL's Centre for Advanced Spatial Analysis (CASA) has been working on a major project for the Greater London Authority (GLA) for the past two years. 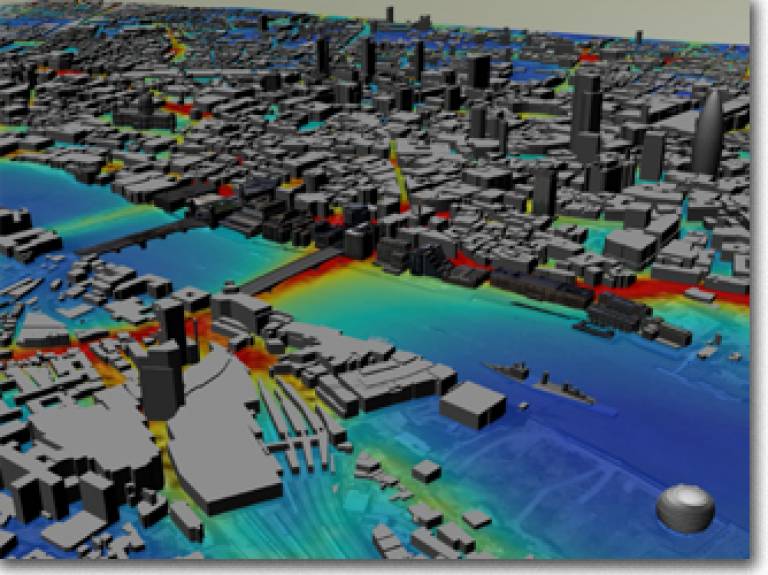 On 25 January 2005, Deputy Mayor Nicky Gavron hosted a reception at City Hall to mark the completion of phase one of the Virtual London project.

Led by CASA director Professor Mike Batty, the Virtual London project is the creation and development a three-dimensional model, covering 20 square kilometres of central London. The aim is to create an online planning tool where architects can load their proposals for a particular site. Subsequently, visitors to the virtual landscape could access the information, including plans, elevations and photographic images, to view how the proposal would affect the surrounding environment. The user can then inform the relevant authorities via email of their consent or objections.

Based on detailed aerial imagery onto which detailed three-dimensional data has been built to generate building shapes and rooflines, the model comprises 45,000 three-dimensional blocks. Layers of data can then be added; a facility intended to enable stakeholders to make informed decisions on their city on issues such as the congestion charge.

Professor Batty said: "We have built some particular features into the model to allow various views of the city. For example, we can flood the city to ten metres above sea level. Many buildings on the South Bank completely disappear at around the four-metre mark. Various layers have also been added to the model, such as air pollution. This shows how the geometry of London and the density of traffic relates to emissions of nitrogen oxide."

The CASA team has pasted the model into new, powerful geographic information system (GIS) software. This function allows users to zoom into a location from any angle. Londoners can also see their city in a myriad of new ways. For example, users can choose to only see buildings built post 1945. The model has also been realised using a CAD/CAM printer.

Professor Batty said: "We are very pleased with the progress of the model, but only a tiny percentage of the blocks have been photogrammetrically rendered - mainly key structures such as St Paul's Cathedral and the Swiss Re Tower. Also, we only have around 25 blocks out of 45,000 that are photo-realistic, so we still have a long way to go."

To find out more about the project use the links below.