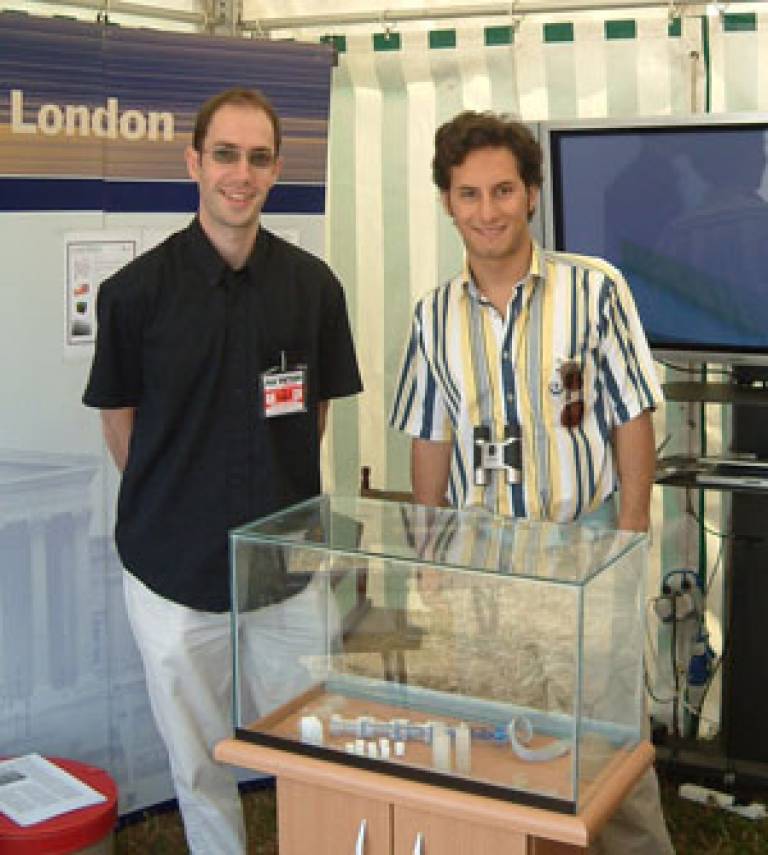 Dr Peter Bentley and Mr Siavash Haroun Mahdavi (UCL Computer Science) were granted exhibition space in the VIP section of the tattoo in order to display their snakebot, the fruit of a research project funded by aerospace company BAE Systems to make a military robot at budget cost that can be used to carry out reconnaissance missions.

Robots are generally very unreliable, largely because they cannot deal with unforeseen circumstances and adapt when they are damaged. An animal is usually able to adjust to injury, for instance limping along on three legs when its fourth has been hurt. In a hazardous environment conventional robots cannot adapt and are quickly rendered useless.

However, in designing and programming the snakebot, Dr Bentley and Mr Mahdavi drew on lessons from successful evolution, which requires creatures to adapt to their environment. Instead of having electrical motors, the snakebot uses "muscles" made from a smart material that it uses to wriggle along the ground. If one of these muscles is damaged, the researchers' software 'evolves' the snake so that it finds a different way to wriggle - a revolutionary new way of programming. The finished snakebot will also have an antenna to broadcast video and audio gathered from its spy mission.

The snakebot met with great interest at the tattoo, said Dr Bentley, who commented: "We were privileged to demonstrate UCL research at one of the world's largest military air shows, to crowds of people varying from children to fighter pilots. We received a very positive response from everyone who came to see us."