UCL is hosting an open day on 13 September 2005 to mark the halfway stage of 'Control and Prediction of the Organic Solid State' (CPOSS), a multidisciplinary research project led by UCL's Professor Sally Price (Chemistry). 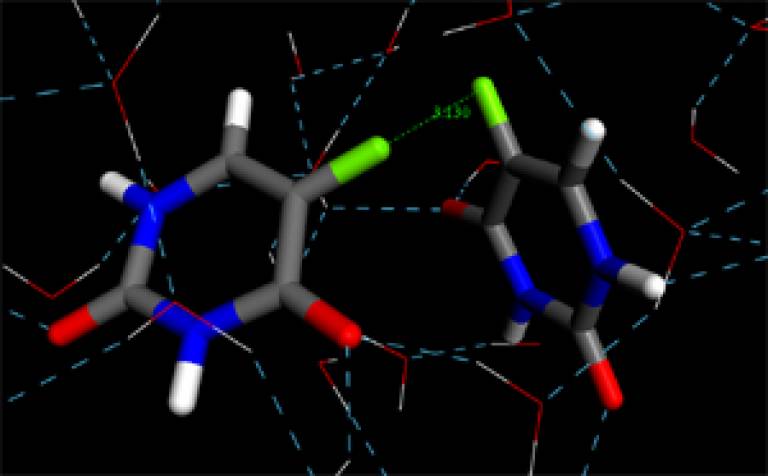 The project is developing novel computational and experimental techniques that could have huge implications for a plethora of manufacturing industries.

Funded by the Basic Technology Programme of Research Councils UK, the project aims to develop experimental and computational technologies for the prediction of organic crystal structures. These structures can be found in a huge number of products, including food, explosives, pigments and pharmaceuticals. Many organic molecules can adopt more than one solid-state form (called polymorphs), which could either prove beneficial or disastrous for a company working with the material.

Polymorphs can appear unexpectedly during the manufacturing process, or while the product is in storage. The appearance of a new polymorph can affect the performance of a drug, for instance by reducing its absorption into the bloodstream or its shelf life. One example of polymorphism is found in cocoa butter. Professor Price says: "The tastiest form of chocolate has a lower melting point - allowing it to melt on the tongue - than the most stable cocoa butter polymorph. If the cocoa butter reverts to its most stable polymorph during storage, giving a greyish-white bloom on the chocolate, it won't have the same sensuous melting sensation in the mouth. Companies understandably spend a huge amount of time and energy experimenting with the solid state forms of new organic products to try to identify and patent all the possible polymorphs, since they can potentially affect product performance and profits."

Polymorphs are also a legal minefield, as each polymorph has unique physical properties, and all companies must register the precise polymorph of any product. Drug manufacturers must also prove that the polymorph used in their pharmaceutical products is stable and can be reliably manufactured.

CPOSS is a collaboration between over 20 researchers across five UK universities. "We are seeking to understand the mysterious phenomenon of polymorphism by developing a range of experimental and computational technologies to provide a complete atomistic description of the polymorphs of several organic molecules" said Professor Price. "The results of these studies will be used in developing a database of known and hypothetical crystal structures and their properties, covering a wide range of organic molecules to provide the basic technology for polymorph prediction and control."

There are three main strands of research to the project: first, Professor Price is leading on the e-science computer generation of possible crystal structures and their mechanical and morphological structures. This involves the development and extension of the range of molecules for which computational searches can be performed, and will be accompanied by calculations of an increasing range of properties of these structures. UCL Computer Scientists are helping Professor Price's group perform the complex calculations to search for the energetically feasible crystal structures more effectively, so that they can study larger, more industrially relevant molecules..

Second, the range of polymorphs formed in a number of compounds are established using experimental methods. A novel automated screening methodology has been developed to search for polymorphs, which also provides basic properties of the structures. Once detected, the polymorph is reproduced and further measurements taken, using national radiation facilities when necessary.

Finally, observations of how solvents and other factors determine which structures are likely to be formed are held using pioneering solid-state, nuclear magnetic resonance (NMR) experiments, as well as computer simulations of formation from solvent, to establish rates of nucleation and growth of the different known and hypothetical polymorphs

"All three strands will combine to create a database containing hundreds of molecules with information on all their known polymorphs, their structures and growth conditions as well as a set of computer generated feasible crystal structures, along with their predicted mechanical, thermodynamic, kinetic and spectral properties," said Professor Price. "This will be data-mined at the end of the project to establish which parameters are the best predictors of the observed polymorphs. The combination of computer technology and experimental methods will provide the scientists with realistic guidelines for predicting the number of polymorphs a compound can form and allow researchers in future to screen for the likely crystal structure and potential polymorphs before the compound has even been synthesised in a laboratory."

Figure 1: Snapshot from the simulation of 5-fluoroucil in water

Figure 2: The sheets in the crystal structures of form 1 (left) and form II (right) of 5-fluorourcil