The awarding of the 2003 Nobel Prize for Medicine or Physiology to Professor Sir Peter Mansfield (Nottingham) confirms UK scientists' leading roles in the development of magnetic resonance imaging (MRI) technology, previously asserted at a 1996 Witness Seminar. 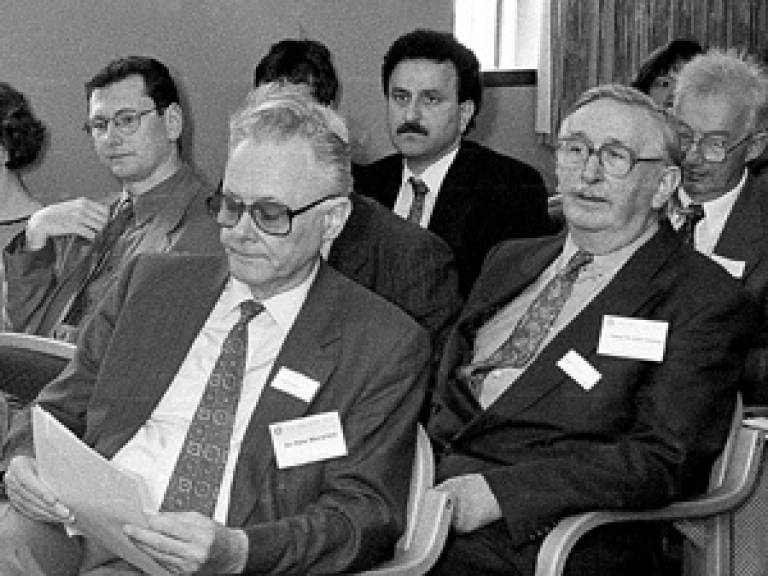 UCL's Wellcome Trust Centre for the History of Medicine hosted a Witness Seminar on MRI technology in 1996. Among the witnesses was new Nobel Laureate Sir Peter .

Sir Peter and Professor Paul Lauterbur (Illinois) shared the prize for their pioneering work on MRI body scanners. The technique creates images of the deep structures of the body, which facilitates diagnosis and treatment of a wide range of medical conditions.

Commenting on the award, Emeritus Professor John Mallard (Aberdeen), another UK pioneer in the field, said that historical accounts of the development of MRI tended to imply it was invented in America, when "all the early developmental work was done in this country".

However, not all historical accounts make that mistake, explains UCL's Dr Tilli Tansey, Reader in the History of Modern Medical Sciences: "In 1996 we held a Witness Seminar entitled 'Making the Human Body Transparent: The Impact of Nuclear Magnetic Resonance and Magnetic Resonance Imaging'. Those at the meeting examined the original discovery of nuclear magnetic resonance and its application in spectroscopy and in MRI during the past 50 years. They also considered the scientific and technical developments, the biological and clinical applications of these new technologies, and issues relating to the support and impact of industrial research in the biomedical and clinical fields."

Witness Seminars involve bringing together people associated with a particular set of circumstances or events, to discuss, debate and even disagree about their reminiscences. Since 1994 they have formed a routine part of the work of the History of 20th-Century Medicine Group. More than 30 have been held, most of which have been published. The entire proceedings of the MRI seminar and other meetings are available online.