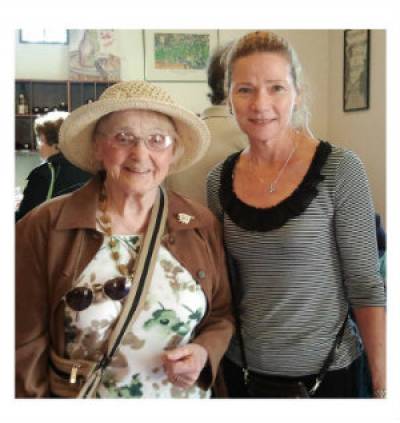 The Vickers Family Trust, named for Dr. Marjorie Vickers and led by her daughter Dr. Alison Vickers, has donated a generous gift to the Faculty of Life Sciences. This has enabled the launch of the Scholarship without Borders fund, which will be awarded to graduate students for academic prowess.

Alison says: 'Marjorie, a spunky and cheerful 5’2” blue-eyed blond, was born and raised in Staffordshire England. Always at the top of her class, she was awarded a county scholarship, which paid for her living expenses at University. In 1943 she received a B.Sc. with First Class Honors in Zoology from the University College of London (UCL), and in 1948 a Ph.D. in Zoology from the Faculty of Life Sciences at UCL with Professor R.M. Gordon, M.D., D.Sc. as her advisor.

During WWII, and the bombing of London, Marjorie was evacuated to the University of Birmingham. Marjorie continued her education, completing a post-graduate certificate in Education from the University of Cambridge (1944). She then became an Assistant Lecturer (1944-46) at the School of Tropical Medicine in Liverpool, and completed a diploma in Tropical Medicine (1946), where Professor Gordon was chairman. She continued her Ph.D. research as an external UCL student. Marjorie also taught Tropical Medicine to US M.D.’s, since there were no such programs in the USA.

Marjorie worked at Glaxo briefly, and then accepted a faculty position in the Zoology Department at the University of Birmingham (1946-48). Her boss was the father of Immunology and Nobel Laureate, Sir Peter Medawar. At the end of WWII Marjorie and Michael married, and immigrated to Toronto, Canada in 1948. Marjorie taught in the Department of Zoology at the University of Toronto. They moved to Lincoln, Nebraska, and after 5 years of US residency both Michael and Marjorie became US citizens. In California, Michael worked on unmanned spacecraft at the Jet Propulsion Lab, and Marjorie taught nursing and pre-medical students at Pasadena City College. She completed her career as Professor Emerita.

My parents appreciated having received their education for free, and realized the opportunities they had because of their advanced degrees. Both were advocates for education, supporting my own as well as the nieces and nephews. I have a Ph.D. in Pharmacology and Toxicology and have spent my career in the pharmaceutical industry investigating mechanisms of side-effects of drugs.'