Second year LLB student John was recognised for his role in representing the voices of UCL Laws students to make the Faculty a great learning environment for all. 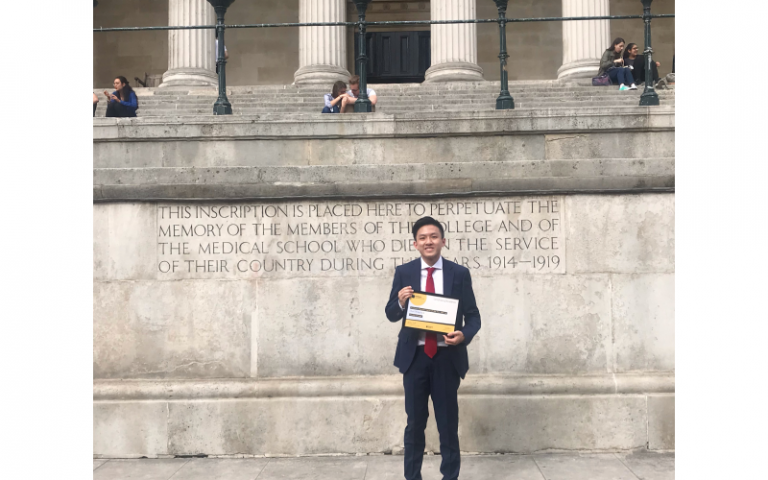 Image: Johnathon with his Academic Rep of the Year Award in 2019

UCL Laws is delighted to share that LLB student and Lead Department Representative Johnathon Choi Ching Jack was named Academic Rep of the Year for UCL Laws in this year’s UCL Education Awards.

The annual Education Awards recognise and celebrate the achievements of staff and students and their contributions to the learning community. The Academic Rep of the Year Awards celebrate the representatives who went the extra mile to represent students and have worked with staff to improve the academic experience.

The awards are organised by the UCL Students’ Union, which commented that John “has consistently worked hard to ensure that everyone’s voices are heard in order to make the Faculty a better place for all.”

This is the second consecutive year in which John’s hard work and dedication to representing his peers has been recognised, having won UCL Academic Rep of the Year in 2019 (pictured above).

Commenting on his award, John said:

“I am honoured to accept this award on behalf of the Faculty of Laws for the second consecutive year. This year came with some unorthodox challenges. With uncertainty over Brexit, industrial action and a global pandemic, the need for effective staff-student partnership became more pressing than ever. Thankfully, the Faculty of Laws’ commitment in responding to student issues in a timely and meaningful manner is by far second to none. I am confident that students, representatives and staff will continue to work closely together and support each other, to ensure that a conducive learning environment will always be maintained at UCL Laws.”