Johnathon Choi Ching Jack was recognised for his outstanding role in his capacity as the First Year Student Representative for the LLB Law programme. 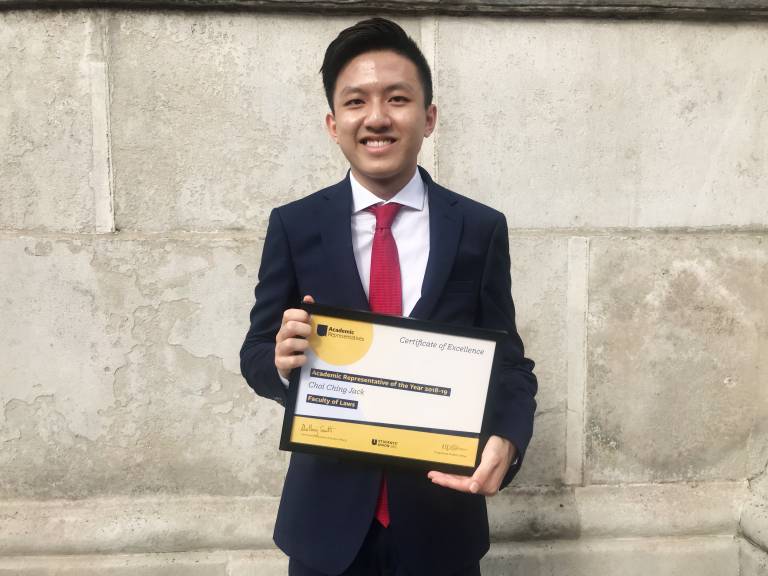 The UCL Faculty of Laws annually elects student representatives from each year group to represent students’ views to the faculty and sit on various committee meetings, such as those held by the Staff Student Consultative Committee (SSCC) and Faculty Teaching Committee (FTC). Student representatives are essential to the running of the Faculty, as they ensure that the opinions of the student body are taken into account in decision-making and they also advocate for positive change on campus.

Johnathon Choi Ching Jack has been the First Year Student Representative for the LLB Law undergraduate programme and an active committee member in the UCL Student Law Society.

“Choi Ching Jack received many commendations from his peers this year, who describe him as dedicated, supportive and approachable in his role as Course Rep. He secured a vending machine for the Bentham House café which proves especially useful during non-term time and outside of café opening hours. Choi Ching Jack is an excellent interlocutor between the student body and the faculty; students feel it is easy to voice any concerns or address any problems through him. Choi Ching Jack is praised for meeting up with faculty on a weekly basis so that challenges are dealt with efficiently. His peers believe that it is by his efforts that ‘the relationship between student and faculty is at an all time high’.”

Johnathon was one of twelve faculty winners recognised for their outstanding work during the Education Awards Ceremony 2019, which celebrated the high calibre of teaching and learning at UCL. During the ceremony, he also received a special commendation by the Pro-Vice-Provost for Student Experience, Professor Deborah Gill, for his contributions to student life here at UCL, despite being a first-year student.

“I am honoured and humbled to accept the Academic Rep of the Year Award on behalf of the Faculty of Laws. It has been a great pleasure representing my peers and contributing to the positive learning environment at the Faculty. However, my time as a student representative would not have been nearly as enjoyable had it not been for the Faculty’s commitment in reacting promptly and meaningfully to student issues. I am confident that students and staff members will continue to work closely together and support each other, to ensure that a conducive learning environment will always be maintained at UCL Laws.”