Final year law students Neeva Desai and Robert Shu secured victory for UCL at the Inner Temple Inter-Varsity Moot last week, which attracted over 20 teams from around the country. 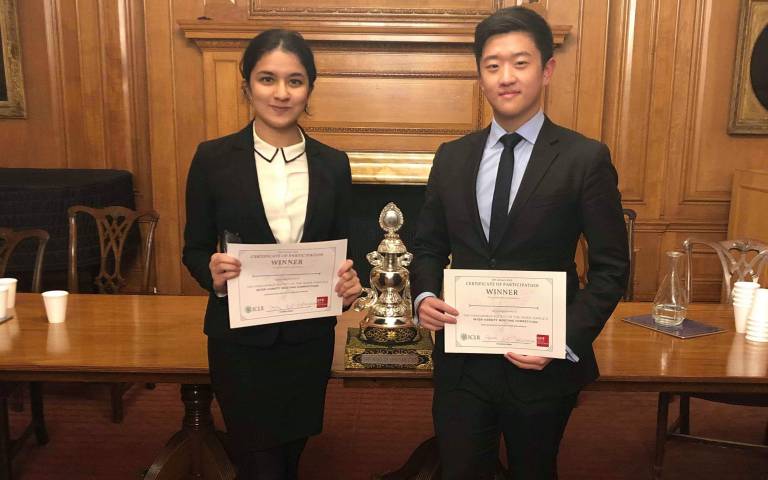 This year’s problem was set on the law of evidence and concerned the admissibility of an illegally recorded phone call and subsequent confession in a criminal trial. UCL pleaded against teams from Derby, Oxford Brookes, Kent, Durham and finally Newcastle, to win the King of Bhutan Cup. The victory was awarded to UCL by an esteemed panel, composed of Masters Christopher Brougham QC, Guy Fetherstonhaugh QC and Alastair Hodge.

UCL Laws has had a strong history in the competition, with last year’s team making it as far as the quarter finals. However, this is the first time in over ten years that the university has taken home the coveted Bhutan Cup.

"I would like to extend my warmest congratulations on such a wonderful and impressive win. I feel very proud of the stellar achievements of our students."

For their efforts, Neeva and Robert were each presented with a mini-pupillage at criminal and regulatory law set QEB Hollis Whiteman and book vouchers from the ICLR. The team will also be called back in October to face off against the winners of the ESU-Essex Court Mooting Competition in the Inner Temple Magna Carta Moot.

The Law Society would like to extend its thanks to UCL Laws alumni and pupil barrister at Six Pump Court Chambers Zander Goss for serving as UCL’s judge for the event.