The one-day conference held in Brussels, Belgium, addressed the moving boundaries of competition law, with an emphasis on digital markets. 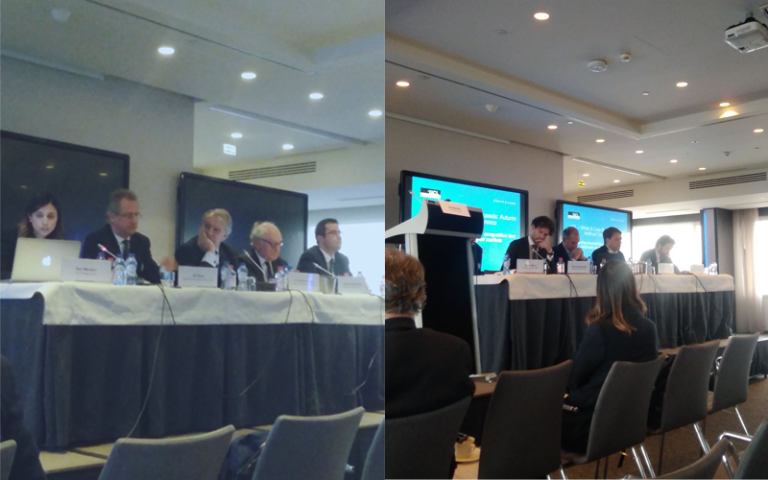 Co-hosted by the UCL Centre for Law, Economics and Society and White & Case Brussels, this one-day conference addressed the moving boundaries of competition law, with a particular emphasis on digital markets.

Following opening remarks by Dr Deni Mantzari, Acting Director of UCL CLES, the first panel provided an engaging debate on the shifting definition of a ‘competition issue’. The two competition authority chairs on the panel, Šarūnas Keserauskas of the Lithuanian Competition Council and Martijn Snoep of the Netherlands Authority for Consumers and Markets, spoke of increased public expectation that enforcers will address non-price issues. White & Case’s Dr Assimakis Komninos stressed the need for transparency should competition authorities choose to pursue non-traditional competition issues. Professor Nicolas Petit remarked on the evolutive and context-dependent nature of consumer preferences and praised the invocation of a consumer welfare ‘spirit’ to streamline enforcement. Professor Giorgio Monti argued that competition law may tackle numerous concerns—including the environment, poverty, privacy or innovation—by characterising them as harms to the competitive process.

The second panel addressed vertical restrictions in the digital economy. The European Commission’s Andrea Amelio focused his intervention on resale price mechanism, citing econometric evidence demonstrating the adverse effects of the practice on industry. Professor Michal Gal focused on data joint ventures and reasoned they may allow firms to overcome data collection barriers, while Professor Patrick Rey noted that, while many of the issues in the digital economy are present in the brick-and-mortar economy also, some novel practices have emerged alongside digitisation that call for additional thought. In closing the discussion, Jacquelyn MacLennan, from White & Case, said that vertical restraints are an area where traditional laws continue to apply but the boundaries have shifted in a way that would have been impossible to predict a decade ago.

The third panel offered thoughtful reflections on the concept of power in competition law. Dr Victoria Daskolova, from the University of Twente, presented on unfair trading practices in the digital economy and the relationship between market power and economic dependency. Dr Helen Jenkins, Managing Partner at Oxera, analysed the linkage between market power and market value. Dr Jorge Padilla, of Compass Lexecon and the Barcelona Graduate School of Economics, examined platform envelopment strategies, with a particular emphasis on data and privacy tying. Similarly, White & Case’s James Killick focused primarily on the issue of ‘killer acquisitions’, though expressed doubts as to their harm and remarked that they may best be dealt with under Article 102 rather through the merger framework.

The day concluded with a roundtable on procedural aspects of competition law in the digital economy. Chaired by Sir Nicholas Forwood of White & Case and Brick Court Chambers, the panellists—Dr Mantzari, Ulf Oberg from the General Court of the European Union, Alfonso Lamadrid of Garrigues and Belgian Competition Authority President Jacques Steenbergen—provided an entertaining discussion of topics including reversing the burden of proof and the use of interim measures.

The Annual UCL CLES/White & Case Conference Autumn Conference aims at bringing together academics, enforcers and practitioners to debate challenging and pertinent competition law issues. Thanks to the efforts of our panellists, chairs and an engaged audience, the conference certainly delivered on this mandate and we look forward to next year’s event.

A detailed summary of the agenda and presentation slides are available at the conference website: https://www.ucl.ac.uk/laws/events/2019/nov/2nd-ucl-white-case-brussels-autumn-competition-law-conference