In the latest episode of Coast Australia, the Bentham Project’s Tim Causer joined the team to explore the history of Norfolk Island, colonial Australia’s notorious penal settlement. With Coast presenter Neil Oliver, Tim delves into the convict history of the island often billed as the ‘most boring place in the whole wide world’.

Last June, I had the pleasure of travelling to Norfolk Island at the invitation of Great Southern Film and Television, to film part of an episode of the second series of Coast Australia, hosted by Neil Oliver. The first series was a huge hit in both Australia and on BBC Two, and it was a genuine delight to be invited to talk about Norfolk Island’s convict past, the focus of much of my research. This was my third trip to the Island, a beautiful, tiny speck in the vastness of the Pacific, located about 900 miles east of the Australian mainland.

Some people in Britain might have become vaguely aware of Norfolk Island during last year’s Commonwealth Games in Glasgow, when the Island’s green-clad team made a great many friends, and their women’s lawn bowls team humbled South Africa’s representatives.

Norfolk Island’s history is far less well-known here, however.During Europe’s Middle Ages, the Island was home to Polynesians, who abandoned the place during the fifteenth century. Norfolk Island was uninhabited when it was first settled by Europeans in 1788, only a matter of weeks after the foundation of the penal colony of New South Wales. Early Sydney endured near-starvation condition, and Norfolk Island was a source of much-needed supplies.

If anyone does know anything about Norfolk Island, it’s generally for three things. First, the Island’s eponymous pine trees. Second, for, in 1856, becoming the new home of the descendants of the Bounty mutineers and Tahitian women, who had been living at Pitcairn Island. And third—perhaps above all—for the notorious penal settlement which operated between 1825 and 1855, founded as a place where convicts already transported to New South Wales and Van Diemen’s Land could be re-transported.

This period has given Norfolk Island an enduring historical reputation, and during the nineteenth century it was known through various colourful appellations: the ‘Botany Bay of Botany Bay’, the ‘Gehenna of the Waters’, and the ‘South Sea Abomination’, amongst others. By the mid-1830s, Norfolk Island was the most notorious penal settlement in the English-speaking world, so notorious that in 1840 Charles Dickens even offered to write a government-sanctioned novel set there, to ensure that British criminals were sufficiently afraid of it. 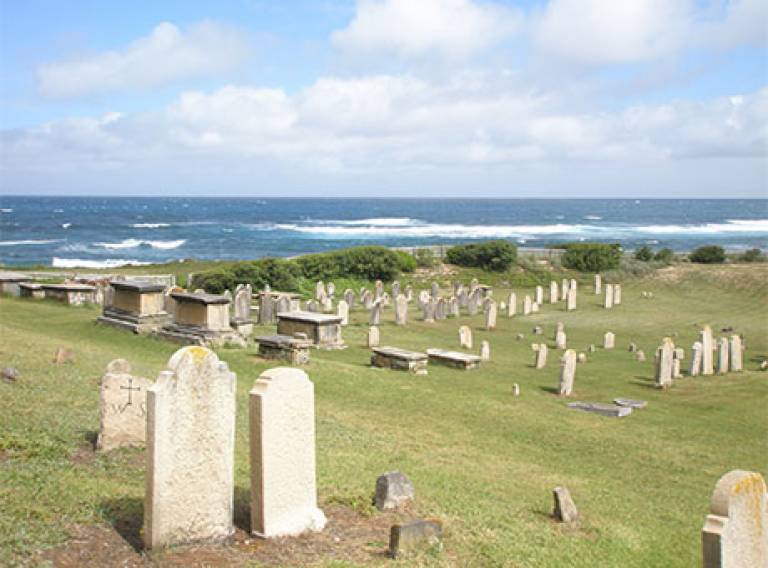 I first became interested in this period of Norfolk Island’s past as an undergraduate at the University of Aberdeen, when eading Robert Hughes’s blockbuster history of transportation, The Fatal Shore, in which Hughes vividly describes Norfolk Island as a veritable blood-soaked hell-on-earth, populated by sadistic penal officials and vicious convicts. Fascinated, I wondered how such a place could have existed; after several years of research, it is clear that it did not, at least as Hughes described it. Most histories of the penal settlement—usually influenced by The Fatal Shore, despite its many misconceptions about Norfolk Island—are rather sensationalist, rely on a small group of sources, and are the product of very little primary research.

My PhD (and on-going) research sought to fully explore the Norfolk Island penal settlement, by examining primary sources which have not hitherto been used in detail, including official records, correspondence, and convict narratives. At the heart of this work is a database of 6,458 male convicts detained at Norfolk Island, containing information about their lives before, during, and after their time at Norfolk Island. The research has undermined many of the enduring myths about the Island. For instance, it was long been assumed that convicts sent there were almost all ‘capital respites’, that is, convicts who committed further awful capital offences in the Australian colonies, and who were only spared the noose on condition of being sent to Norfolk Island for life. In fact, over half were either sent directly to Norfolk Island from England and elsewhere, or without receiving any conviction in colonial higher courts. Two-thirds were detained at Norfolk Island for non-violent property offences, and so the men were not the violent, unrestrained criminal of legend.

Let us be clear, though: Norfolk Island was colonial Australia’s most brutal penal station. But writers and historians have needlessly exaggerated matters, trivialising the genuine and profound suffering of the convicts detained there. Chief amongst these exaggerations has been the extent of flogging, a subject of many outlandish claims. During the course of my research, I compiled a day-to-day analysis of flogging at Norfolk Island, and the reality of corporal punishment was terrible enough to require no embellishment. In the years 1829, and 1833 to 1853, 136,440 lashes with the cat-o’-nine tails were inflicted upon the bleeding backs of convicts.

One of the very few Norfolk Island convicts to leave any account of enduring this vicious, invasive punishment was the Irishman, Laurence Frayne. Even if he were ‘made emperor of all the universe’, he wrote, ‘no heart can conceive or can write or tongue can tell the poignant grief & anguish of the sort I have suffered both mental and otherwise’.

Frayne is one of the subjects of this section of the Coast Australia episode. He left behind one of the most remarkable narratives written by a convict, which is now held at the Mitchell Library in Sydney. Frayne’s narrative is both an unapologetic litany of his sufferings—and suffer he certainly did, enduring a staggering 1,125 lashes between July 1832 and November 1832—as well as an eloquent and thoughtful treatise on the just and reformatory management of convicts. I was honoured to have travelled to Norfolk Island with Frayne’s third great grand-niece, Sharn White, who was also taking part in the programme and has researched her ancestor’s life in great detail. During the course of our trip, I was also able to show Sharn that her third great-grandfather, Michael Frayne—Laurence’s younger brother—also spent time at Norfolk Island.

Frayne was given the opportunity to write about his life by Alexander Maconochie, the other subject of this part of the episode. Maconochie was Superintendent of Norfolk Island between 1840 and 1844, during which time he instituted a series of reforms which came to be known as the ‘Mark System’. He intended that convicts should have an interest in their labour, so that through completing their work and behaving well, they could shorten their detention: ‘men will do for liberty what they will not do for lashes’, Maconochie wrote in 1851. For all the faults of both Maconochie and his system, he offered the prisoners hope, as Frayne so tellingly described in comparing Maconochie’s ‘Godlike System’ with the physical coercion prevalent in the earlier years.

My research has led me down a number of unexpected avenues—including acting as a convict extra in The Last Confession of Alexander Pearce while in Tasmania—but perhaps nothing like the experience of this particular journey to Norfolk Island. To cut a long story short, Sharn and I missed our scheduled flight from Brisbane thanks to fog, so were sent back to Sydney for the night. The following day we flew to the stunning Lord Howe Island aboard a turbo-propeller plane, where we met by Rob Ryan and his four-seat light aircraft. The subsequent four hour flight, cruising at ten-thousand feet above the Pacific as the sun set, and landing on a near pitch-black Norfolk Island, was simultaneously exhilarating and terrifying; definitely a once in a lifetime experience (I hope!).

I have continued to explore Norfolk Island’s and Australia’s convict past in my own research, and in my work at the Bentham Project at UCL. Jeremy Bentham wrote one of the earliest and most influential critiques of convict transportation, Panopticon versus New South Wales, which influenced the arguments of many later abolitionists. It transpires that among UCL’s vast Bentham Papers collection are earlier drafts of this work, some much more radical and confrontational than the final version, as well as a large unpublished section. We hope to be able to reconstruct this text for the Collected Works of Jeremy Bentham before too long.

Also among the Bentham Papers is the manuscript of The Memorandoms of James Martin, the earliest Australian convict narrative and the only first-hand account of the well-known escape by a group of convicts who absconded from Sydney in March 1791. In an open boat, they navigated the eastern and northern coasts of Australia, reaching Dutch-controlled west Timor in just over two months. Last year, The Bentham Project published online an annotated edition of the Memorandoms, making the document widely available for the first time.

I would like to thank Great Southern for having me along, and Neil Oliver, director Jane Manning, producer Niamh Linnie, cameraman Greg Kung, and sound recordist Mark Blackwell, for putting me at ease and making the filming such a pleasurable experience.

Tim Causer is a Senior Research Associate at the Bentham Project, based at UCL Laws.

The Norfolk Island episode of Coast Australia premiered on the History Channel in Australia and New Zealand at 7.30pm AEDT on Monday 16 February 2015, and will be repeated frequently on the channel. It will be shown on BBC Two in May.

Great Southern Film & Television is run by Executive Producer Philip Smith in New Zealand and Australia. The Auckland office is currently in pre-production on the first season of Coast New Zealand.