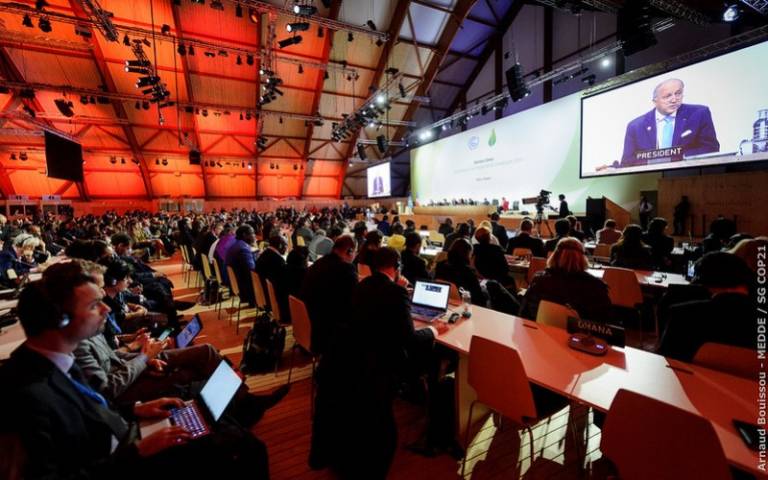 This blog draws attention to the often-overlooked significance of the location of the Conferences of the Parties (COPs) in the development of both national and international climate change law and governance.

The rule of law is a complex idea, multi-faceted and accommodating different values, including that part of legality that demands the development of law. Other rule of law values may also stressed at the COPs. The negotiating power (or lack of power) of certain states speaks to rule of law values of justice, equality and fairness, while the role of citizens in decision-making processes and in holding institutions to account are manifestations of democracy and accountability.

Under the UNFCCC (United Nations Framework Convention for Climate Change) regime, every COP is presided over and hosted by a country; the host city of the COP being decided by the host country. On some occasions, the host country decides to host the COP elsewhere – and so, for example, COP23 Fiji-Bonn was under the Fijian presidency but took place at the UNFCCC headquarters in Bonn; and COP 25 Chile-Madrid under Chilean presidency was held in Madrid due to social upheaval in Chile.

A very clear example of why location might matter to rule of law values within a COP comes from the much-discussed COPs in Copenhagen (COP15) and Paris (COP21). It had been hoped and expected that a new international treaty would be agreed at Copenhagen, as a long-overdue step towards the UNFCCC’s objectives. Development of law, legality as a facet of rule of law, was stressed. COP15 did not deliver, with the resulting lack of agreement seen as one of the larger failures of the UNFCCC negotiations, leading to justified public frustration with the convention governing body. It would only be in Paris, at COP21, that reaching a new agreement became possible. And location mattered. The role played by the Mayor of Paris, the style and nature of French diplomacy, and even the good quality of catering have been singled out as factors contributing towards keeping negotiators’ spirits high and paving the path to the Paris Agreement. By contrast, the Copenhagen failure is said to be partially explained by an uncomfortable venue, cold weather, and simple and limited catering at the conference. Here location was key to create the conditions necessary for the COP to deliver Paris Agreement.

Place was also relevant to COP23 but in a different manner. As noted above, this COP was held in Bonn under the Fijian presidency. Despite being held in Germany, this COP became known as ‘the Islands’ COP’. Being the first COP presided over by a small island state, it brought much attention to the needs and special vulnerability of such countries, pushing for negotiations on loss and damage (i.e. compensation for climate impacts) and climate finance. The results were unsatisfactory, but the attention was there. This leads to reflection on justice, and the unequal negotiating power of different states at the COP. Location can help to strengthen the most vulnerable states, helping to promote climate-justice focused negotiations.

Something similar happened with the recent COP25, as the agenda was driven by the presidency’s priorities. Although it was regarded as dramatically unsuccessful, with few concrete outcomes, the Chilean presidency did manage to promote COP25 as the ‘Blue COP’. This mainly flowed from Chile’s very close relationship with its vast ocean, and its long history of international oceanic leadership. Chile had already been a member of ‘The Ocean Pathway’, and a leading member of the ‘Because of the Ocean’ initiative within the UNFCCC. This emphasis translated into a decision at the COP25, the first of its kind, to recognize the ocean’s role in climate change and to launch a dialogue on the issue (see paragraphs 30-34 of the decision). Again, location mattered. In rule of law terms, this constitutes an expression of legality and arguably democracy - through a sensible recognition of a concern held by multiple actors.

Finally, hosting a COP may also represent a boost for national or domestic climate change law and governance, emphasising rule of law values within the state, between governments and citizens. This was the case for COP20 in Lima and the Chile-Madrid COP25. Both COPs can be identified as triggers for raising awareness of climate change and the development of climate change law and governance. And both offer a good example of how the rule of law values of justice, accountability, and limits on the exercise of power are in play in this space. Perú developed civil society engagement on climate change issues, new climate change policy instruments, and promoted their first climate change law around the time of COP20. In its preparations for COP25, Chile developed a new and more transparent process to update its Nationally Determined Contribution (NDC), so that it could present the revised NDC at the COP. Although there were serious concerns about public participation, this updating process (prompted by the hosting of the COP) was a step forward compared to the previous (intended) NDC. The first Chilean climate change law was presented for discussion by the legislature, and a large and empowered environmental NGO coalition emerged– the Civil Society for Climate Action (SCAC) - during the COP preparations.

One important way of thinking about the rule of law may be as a set of principles that take 'some of the edge off the power that is necessarily exercised over [subjects] in a political community.' Can certain COPs help support (query force?) different forms of legality, accountability and equality that might otherwise have not been realised?

As we look to COP26, I am curious as to the legacy it will leave behind. What impact will the UK and the city of Glasgow have on climate law and governance, and what rule of law values will be particularly stressed on this occasion?