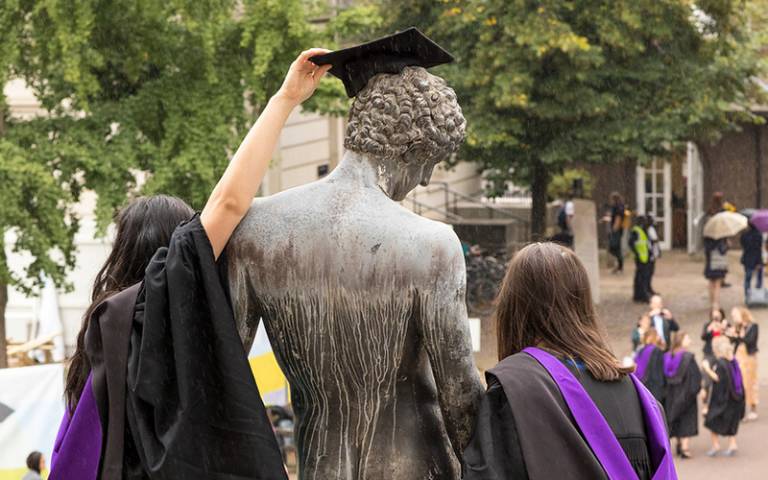 The pair were conferred as Fellows in ceremonies at the Royal Festival Hall, London, which celebrated the graduation of IOE postgraduate and teacher training students.

Reeta Chakrabarti was born in Ealing, London, and was raised in Birmingham. Having graduated from Exeter College, Oxford, she became a reporter for BBC Radio 5 Live in 1994.

Following work as the Community Affairs correspondent and the political correspondent for the BBC, she became the news education correspondent in 2011, and in May 2014 she was appointed news presenter on BBC1 and the BBC News Channel, a role she continues to fulfil today.

In addition to broadcasting, she also works with Pan Intercultural Arts. The organisation aims to help marginalised young people from all cultures and religions who are at risk of social exclusion to improve personal and interpersonal skills through a range of arts activities including drama, music, film, dance, creative writing and visual arts.

Lucy Heller graduated in Politics, Philosophy and Economics from Oxford University in 1977. After having a successful career in the private sector, in 2004 Ms Heller made a change in direction, joining Absolute Returns for Kids, now known as ARK.  In 2012 she became its Chief Executive Officer.

ARK took over its first school in the UK in 2006 and it now runs 38 schools.  It works with schools which are non-selective and located in areas where it can make the biggest difference. It has been consistently recognised as one of the most successful academy networks and one which realises the vision of raising attainment for disadvantaged pupils.

Ms Heller has shared her insights far beyond the ARK network, providing wise counsel on national schools and academies policies. She has been a regular advisor to government and is a member of the Advisory Board for the Education Endowment Foundation.

She has been engaged directly with the work of the IOE. In 2011 she initiated the successful IOE-Times Educational Supplement “London Festival of Education” event which attracted over 1,500 delegates. She has contributed to numerous other Institute public events.