Improving the educational attainment of students from disadvantaged backgrounds.

Best Practice in Grouping Students was a research project funded by the Education Endowment Foundation and conducted by researchers at UCL and Queen's University Belfast, which ran from 2014-2018.

It investigated which methods of grouping secondary school students are most effective in improving their educational engagement and attainment with particular attention to improving the performance of students from disadvantaged backgrounds. The project was independently evaluated by the National Foundation for Educational Research.

For information on our follow-on study, see The Student Grouping Study.

Dos and don'ts of attainment grouping 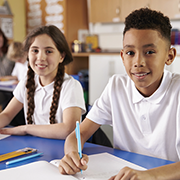 We have produced a guide to research-informed attainment grouping.

Project team
About the project

Previous research has shown that students from disadvantaged backgrounds tend to be over-represented in lower 'ability' sets and streams. They also make less progress than their counterparts in higher attainment groups.

These lower sets and streams can additionally be subject to elements of poor practice such as being taught a different curriculum at a different pace, poorer quality teaching and low expectations for their attainment.

'Best Practice in Grouping Students' is specifically designed to improve the educational attainment of these students by ensuring their progress is not detrimentally affected by poor practice and to assess the relative effectiveness of different methods of grouping students.

The project seeks to achieve this through the implementation of two core interventions that ensure all students are equally able to access high quality teaching and a rich curriculum. One is a trial, 'Best Practice in Setting', and the other is a pilot study, 'Best Practice in Mixed Attainment':

Both the trial and pilot study involve schools undertaking evidence-based interventions which are evaluated for impact on attainment. The study group includes Key Stage 3 students (Years 7 and 8) in Mathematics and English.

The project addresses the needs of students in low 'ability' sets and streams, wherein research has identified socially disadvantaged students are strongly over-represented.

The project draws on substantial existing research evidence (concerning the educational outcomes for young people in low sets and streams, and the related poor practice often associated with such groupings), as illustrated in the Education Endowment Foundation / Sutton Trust Toolkit and elsewhere.

The evidence from the literature concerning existing bad practice and detrimental outcomes associated with low 'ability' groups establishes areas for potential improvement, which will be applied via the interventions.

The intervention on Best Practice in Setting largely relates to organisational principles, and is therefore relatively simple for schools to implement. The RCT will measure effect size of resultant good practice in setting by attainment.

The feasibility pilot of the intervention on Best Practice in Mixed Attainment Grouping (mixed 'ability') will also provide evidence on effect, facilitating future scaling and RCT. The developmental phase of this work will also allow us to research why schools and policy-makers appear so wedded to 'ability' grouping, and what might persuade the adoption of an evidence-based approach.

The project therefore comprises an example of 'disciplined innovation', building both on existing research evidence and compelling logic. It directly addresses the educational attainment of disadvantaged students, and promises tangible new evidence on effective practice in students grouping.

The project is a mixed methods study, including RCT, surveys, interviews and observations.

The project began with a pilot year (2014/15) to develop, test and refine the practices and professional development now being implemented in the interventions for the main stage of the project (2015/16 - 2016/17).

We are grateful for the expert consultancy provided by teachers from our inspirational partner schools in the pilot project:

The Best Practice in Grouping Students project received the support and guidance of the following individuals:

The Student Grouping Study: Investigating the impact of setting and mixed-attainment grouping