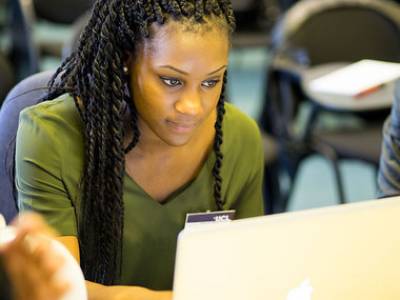 Providing a definition helps to make sure the reader understands the way that you are using the terminology in your writing.

Remember that dictionaries are not considered suitable sources for definitions, as they will provide the general meaning, not the academic meaning or the way the term is used in your field.

If you can't find a precise 'definition' as such in the literature, you can say that 'the term is used to refer to xyz', and summarise or describe it in your own words.

You can also use the phrase 'For the purposes of this discussion, the term xyz will be taken to refer to ...'

The paragraphs below have an example of a definition with various interpretations. This level of discussion is not always necessary; it depends how much agreement or disagreement there is on the meaning of the term.

This extract is from the 'definitions' section of a Masters assignment.

Purpose and definitions of coaching

It is worth outlining the boundaries and purpose of the term 'coaching' before proceeding with the discussion. In general, 'coaching' tends to be used within human resource management and organisational theory to refer to a particular type of helping relationship or conversation (Boyatzis, Smith and Blaize, 2006). The object of help in this context is subject to some divergences in interpretation. Indeed, one feature shared by articles about coaching seems to be that authors frequently point out how little agreement there is on the use of the term, and how inconsistently it is used (see, for example, Boyatzis, Smith and Blaize, 2006:12, or Gray and Goregaokar, 2010:526). Some go further, linking the widespread adoption of coaching to the range of interpretations, lamenting that "the very popularity of the approach has resulted in greater confusion" (Clutterbuck, 2008:9), or pointing out with apparent surprise that "despite its popularity, there is little consensus on the nature of executive coaching" (Gray et al, 2011:863). It has even been described as "a kind of 'catch-all' concept, covering whatever you want to put under it" (Arnaud, 2003:1133). Variations appear in areas including the stated aims, the specific approach, the location of the meetings, or the techniques and methods used (ibid). Somewhat paradoxically, there appears to be a general consensus only on the lack of consensus.

In response to the lack of an accepted definition, some authors have attempted to clarify what the term 'coaching' should refer to, and do so in particular by differentiating it from 'mentoring', a concept with which it is often associated. David Clutterbuck, who has been working in the field for at least 30 years, and who has published extensively on the topics of both coaching and mentoring, (http://www.davidclutterbuckpartnership.com), has frequently attempted to delineate the two activities. In a relatively recent article (Clutterbuck, 2008:8), he suggested that the term 'coaching' should primarily be used when performance is addressed, rather than, say, holistic development, a recommendation which highlights that coaching takes place within the context of enhancing productivity at work. The focus on performance is echoed in more practical guidelines such as those written by Atkins and Lawrence (2012:44) in the industry publication IT Now, when they state "coaching is about performance, mentoring is personal".

Although it is often cited, this division between 'performance' and 'personal' could be considered slightly artificial, and even unnecessary. Indeed, as performance is 'performed' by the person, it is interesting to notice what appears to be a denial of the potentially transformational aspect of conversations within a helping relationship. A full discussion of this denial is outside the scope of this short report, but it could be caused by various influencing factors. Those factors might include the wish to justify the allocation of resources towards an activity which should therefore be seen as closely related to profit and accountability, coupled with a suspicion of anything which might be construed as not immediately rational and goal-focused. In other words, to be justifiable within a business context, a belief may exist that coaching should be positioned as closely oriented to business goals. This belief could underlie the prevalence of assertions that coaching is connected more to performance management than to holistic development. However, this report takes the view that there may be a useful overlap, as described below.

Looking to research, the overlapping of personal development with performance management was recently addressed by Gray et al (2011), in a study which aimed to establish whether coaching was seen as primarily beneficial to the individual's development or to the organisation's productivity. In brief, Gray et al's (2011) paper indicates that although involvement in coaching might be experienced as therapeutic by many coachees, it is generally positioned in the literature and by companies which engage in it as something beneficial to the organisation, as mentioned above. The authors also concluded that coaching may enhance various management competencies. Overall, the study indicates that coaching may be of interest to organisations as something which may enhance staff performance and productivity. In addition, although it does not always appear as the primary focus, and is even denied as an intention by some authors as discussed above, it may be that participation in coaching could also bring developmental benefits to the individual.

In essence, this report takes the view that the term coaching refers to an arranged conversation or series of conversations within a work context, conversations which aim at allowing the coachee to discuss and gain clarity on various work-related challenges or goals. Although we will adhere to the general conception provided above of coaching as carrying the intention of enhancing performance or competencies, the potential for personal or holistic development will be acknowledged. Additionally, coaching is often linked in literature to leadership (Boyatzis, Smith and Blaize, 2006; Stern, 2004), yet this report does not adopt that pattern in a restrictive sense. In other words, we would either consider that participating as a coachee can be useful for any employee, not only leaders, or, alternatively, we would broaden the definition of 'leadership' to include any colleague who may have an influence within the organisation: a description which could arguably include any staff member. Overall, therefore, the report and its recommendations will prioritise the potentially beneficial outcomes of conversations which fall within the realm of coaching, rather than restricting the discussion to whether or not any particular activity can legitimately be given this term. This may be a broader usage of the concept than that followed by some writers, but is grounded in the intention to provide a practicable analysis of the needs for coaching within an organisation. Within this context, this report is predominantly informed by psychoanalytic theory and practice, justified below.