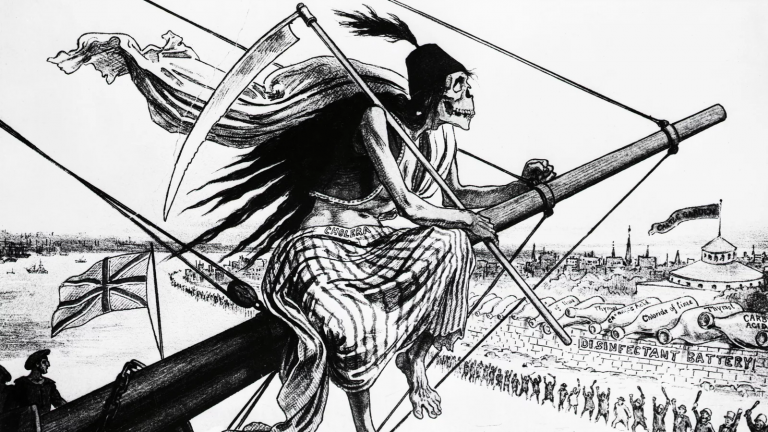 In nineteenth-century Britain, the inclusion of a medical man in the ship’s company became a matter of course. But, in 1839, the Admiralty found ‘no candidate […] at all’ for the position of naval surgeon whereas the Army easily attracted ‘well qualified gentlemen’ to become field-surgeons. Reportedly, the widespread ‘feeling against the navy’ was due to it being considered ‘the very lowest grade of medical employment’. This was in spite of the fact that the role required serious aetiological research, particularly the mapping of ‘medical topographies’ and the study of foreign diseases. Although diaries and log-books record scrupulous ‘sweeping, scraping […], sprinkling & thorough swabbing’, alarming outbreaks in ports led to the imposition of controversial quarantine regulations. Sailing and sickness were further associated through lively debates between contagionists and miasmists conducted in the national press: was disease being imported as ‘a thing’, or, as the Spectator suggested, were the damp and cramped ships themselves ‘disease-manufactories’? Were the very voyages that bolstered Britain’s colonial power threatening to weaken her domestic vigour? Underappreciated and under-resourced naval surgeons seemed to be the last line of defence against public health catastrophe.

This paper reads first-hand accounts of Victorian ships’ doctors alongside representations of marine medicine in the nineteenth-century press. A literary-critical approach reveals how these accounts frequently combined aesthetic and epistemic elements and travelled repeatedly between the documentary and imaginary. This was vital in situating sailing vessels as ‘new’ and distinct sites of medico-scientific activity, and yet spaces which were anchored to landed discourses, particularly those relating to employment and public health. For instance, the Lancet, a medical journal dedicated to improving the naval surgeon’s lot, strikingly compared appalling crew-mortality rates to contemporaneous conditions of industrial employment. Similarly, non-medical journals imagined the conditions below deck to be akin to those in Britain’s expanding urban slums where outbreaks of cholera and typhoid were common. In short, marine medicine leaked and absorbed meanings into and from other social issues and reform movements in ways that have yet to be recognised. As well as tracing these connections, this paper suggests that the representational strategies used to express anxieties about disease containment and transmission shaped how aetiological knowledge was produced and understood.

(Associate Professor in the History of Early Modern and Modern India, UCL)