IAS Turbulence: Ilona Németh on the Turbulent Geohistories of Sugar 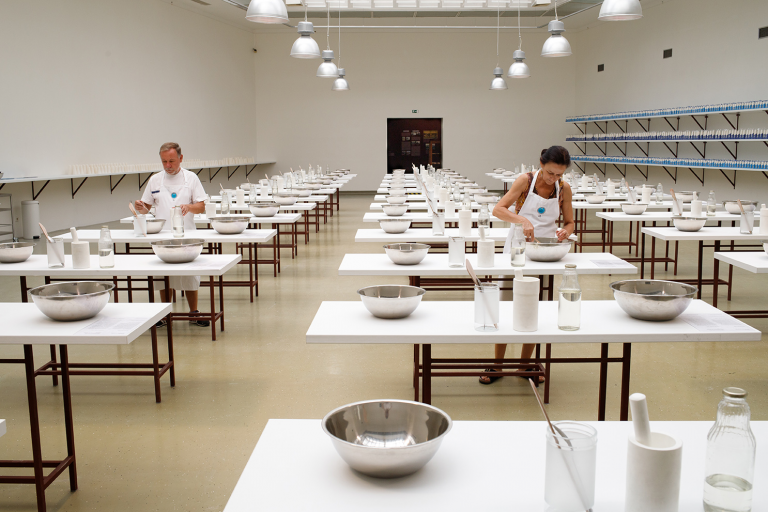 In her Eastern Sugar project, Bratislava-based artist Ilona Németh investigates the pathologies of economic transition, uncovering its roots in the flawed mechanism of privatisation mired by asset-stripping and systemic nepotism during the headlong rush from late socialism to feral capitalism. She chronicles the brutal dismantling of the material infrastructure of a once thriving sugar industry, investigates the invisible causes of its decline in the distant machinations of multinational corporations, and revivifies the forms, practices and sociability of sugarloaf-making in an exhibition setting. The choice of sugar as the prism through which to examine the multiple upheavals of the era of globalisation brings deeper historical connections with a cane sugar trade based on slavery linked to an earlier phase of capitalist expansion. This panel aims to bring comparative perspectives and parallel experiences from other geographies to the discussion of the turbulent geohistories of sugar illuminated by Ilona Németh’s work. Considered also is the extent to which the traumatic social transformations highlighted by Eastern Sugar are symptomatic of global changes to the world of labour brought by automization and how far the global scourge of populism can be traced back to economic dislocations following the collapse of the communist system.

Ilona Németh is an artist, curator and professor in the Intermedia Department at the Academy of Fine Arts and Design in Bratislava. Her work has dealt with questions of gender and body politics, tackled social and political issues through urban interventions and public installations, and engaged with overarching contemporary themes, such as the relationship between private histories and political ideology. Her international exhibitions include Invitation for a Visit in the Pavilion of the Czech and Slovak Republic at the Venice Biennial in 2001, the Prague Biennale (2005, 2007, 2011), Gender Check – Femininity and Masculinity in the Art of Eastern Europe, MUMOK, Vienna (2009), Good Girls: Memory, Desire, Power, Museum of Contemporary Art, Bucharest (2013), Paradox 90, Kunsthalle, Bratislava (2014) and Inside Out, Mestna galleria, Ljubljana (2015). She was a participant and co-organiser of the Private Nationalism exhibition series (Prague, Košice, Pécs, Krakow, Bratislava and Budapest,2014 -2016). Sugarloaf Manufacture was shown at Karlin Studios/Futura, Prague (2017) and Eastern Sugar at Kunsthalle, Bratislava (2018). She is the recipient of numerous prizes and scholarships.

Cooking Sections (Daniel Fernández Pascual & Alon Schwabe) is a duo of spatial practitioners based out of London. It was born to explore the systems that organise the WORLD through FOOD. Using installation, performance, mapping and video, their research-based practice explores the overlapping boundaries between visual arts, architecture and geopolitics. Since 2015, they are working on multiple iterations of the long-term site-specific CLIMAVORE project exploring how to eat as climate changes. In 2016 they opened The Empire Remains Shop, a platform to critically speculate on implications of selling the remains of Empire today. Their first book about the project was published by Columbia Books on Architecture and the City.

Leon Wainwright is Reader and Head of Art History at The Open University, UK. His research has a transatlantic scope, bringing together the politics of historiography in art history with the philosophy of aesthetics, and new approaches to materiality and geographical space in the social sciences. He is responsible for six books, including the single-authored titles Phenomenal Difference: A Philosophy of Black British Art (Liverpool University Press, 2017) and Timed Out: Art and the Transnational Caribbean (Manchester University Press, 2011). He is a former long-standing member of the editorial board of the journal Third Text, and founding editor of the Open Arts Journal. From 2014-2015 he occupied the inaugural position of Kindler Chair in Global Contemporary Art at Colgate University, New York, and he has held visiting roles at UC Berkeley, Yale University, and the University of Oxford. In 2013 he became a recipient of the Philip Leverhulme Prize in the History of Art.

Maja and Reuben Fowkes head the Postsocialist Art Centre (PACT) at the Institute of Advanced Studies, UCL and co-direct the Getty Foundation-supported research initiative Confrontations: Sessions in East European Art History. They are founders of the Translocal Institute for Contemporary Art, an independent research platform focussing on the art history of Central Europe and contemporary ecological practices. Recent and forthcoming publications include a co-authored book on Central and Eastern European Art Since 1950 (2019), Maja Fowkes’s The Green Bloc: Neo-Avant-Garde and Ecology under Socialism (2015) and a special issue of Third Text on Actually Existing Artworlds of Socialism (December 2018).