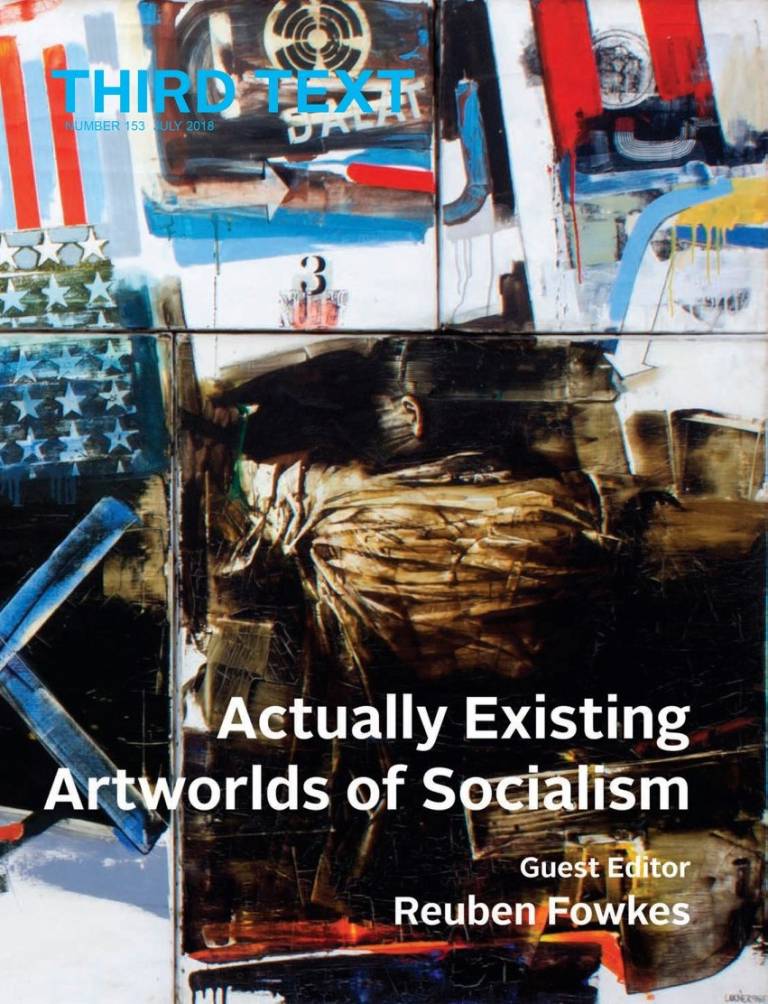 This panel discussion brings together contributors to the special issue of Third Text on Actually Existing Artworlds of Socialism and guest respondents to debate the legacy of the socialist system for contemporary art and politics.

'Research into the institutional settings and practicalities of artistic production during the socialist period is giving rise to more nuanced accounts that complicate the distinctions made between the heroism of the neo-avant-garde and complicity of official artists, revealing an art system that was more variegated, flexible and generative than has been widely assumed. This panel examines the far-reaching implications of the understanding that artists from across the stylistic and ideological spectrum were productively imbricated in the calculated opacities and unlikely rapprochements of the ‘actually existing’ artworlds of socialism. Discussion of the specific traits of Eastern bloc artworlds and the key differences between art institutional landscapes across the Cold War divide opens onto the critical question as to what might be salvaged from the historical experience of art under socialism. Furthermore, if post-socialism is conceived not as a timeless category but as a specific historical period, then what are the prospects for the socialist project in the new social and political circumstances of unfolding global disorder?

Maja and Reuben Fowkes head the Postsocialist Art Centre (PACT) at the Institute of Advanced Studies, UCL and co-direct the Getty Foundation-supported research initiative Confrontations: Sessions in East European Art History. They are founders of the Translocal Institute for Contemporary Art, an independent research platform focussing on the art history of Central Europe and contemporary ecological practices. Recent and forthcoming publications include a co-authored book on Central and Eastern European Art Since 1950 (2019), Maja Fowkes’s The Green Bloc: Neo-Avant-Garde and Ecology under Socialism (2015) and a special issue of Third Text on Actually Existing Artworlds of Socialism (December 2018). They have recently contributed chapters to Art and Theory of Post-1989 Central and Eastern Europe: A Critical Anthology (2018), Doublespeech: Hungarian Art of the 1960s and 1970s (2018) and Extending the Dialogue (2017). Their curatorial projects include the Anthropocene Experimental Reading Room, the Danube River School and they are also founding members of the Environmental Arts and Humanities Initiative at Central European University Budapest.

Anthony Gardner is Head of the Ruskin School of Art at the University of Oxford, where he teaches Contemporary Art History and Theory and is a Fellow of The Queen’s College. He has published widely on subjects including postcolonialism, postsocialism and curatorial histories, and is an editor of the MIT Press journal ARTMargins. Among his books are Mapping South: Journeys in South-South Cultural Relations (Melbourne, 2013), Politically Unbecoming: Postsocialist Art against Democracy MIT Press, 2015) and, also through MIT Press in 2015, the anthology Neue Slowenische Kunst: From Kapital to Capital (with Zdenka Badovinac and Eda Čufer), which was a finalist for the 2017 Alfred H Barr Award for best exhibition catalogue worldwide. His latest book, co-authored with Charles Green (University of Melbourne), is Biennials, Triennials and documenta: The exhibitions that created contemporary art, published by Wiley-Blackwell in 2016.
Marko Ilić is a Leverhulme Early Career Fellow at UCL SSEES. His current research project explores the intersections between contemporary art and politics in post-socialist societies, focusing on the post-Yugoslav context. This project stems from his PhD, which was the first comprehensive study of Yugoslavia's alternative art spaces between 1965-1989, known as Students’ Cultural Centres. His articles have been published in Third Textand ARTMargins, and he contributed a chapter to Collaboration and its (Dis)Contents (Courtauld Books Online, 2017). He is also currently working on a monograph entitled Self-Management: The New Art Practice in Yugoslavia, 1966-1989. Before joining SSEES, he worked as an Associate Lecturer at the Courtauld Institute of Art and as a Teaching Fellow in Art History at Newcastle University.

Magdalena Radomska is Post-Marxist art historian and historian of philosophy, Assistant Professor at Adam Mickiewicz University in Poznan, Poland. She holds a PhD in art history, and has received scholarships at the Courtauld Institute of Art in London, the Hungarian Academy of Sciences in Budapest and at the Eötvös Loránd University in Budapest. She was a director and lecturer of the course Writing Humanities after the Fall of Communism in 2009 at Central European University in Budapest. In 2013 her book The Politics of Movements of Hungarian Neoavantgarde (1966-80) was published. Currently Radomska is engaged in a research on the Post-Communist art in Post-Communist Europe (grant received from the National Science Center) and criticism of capitalism in art (book: the Plural Subject: Art and Crisis after 2008) and – as her second PhD – she is writing a monograph on Post-Marxism. She is a member of both Polish and Hungarian AICA and editor of magazine Czas Kultury. Radomska is a founder of Piotr Piotrowski Center for Research On East-Central European Art.