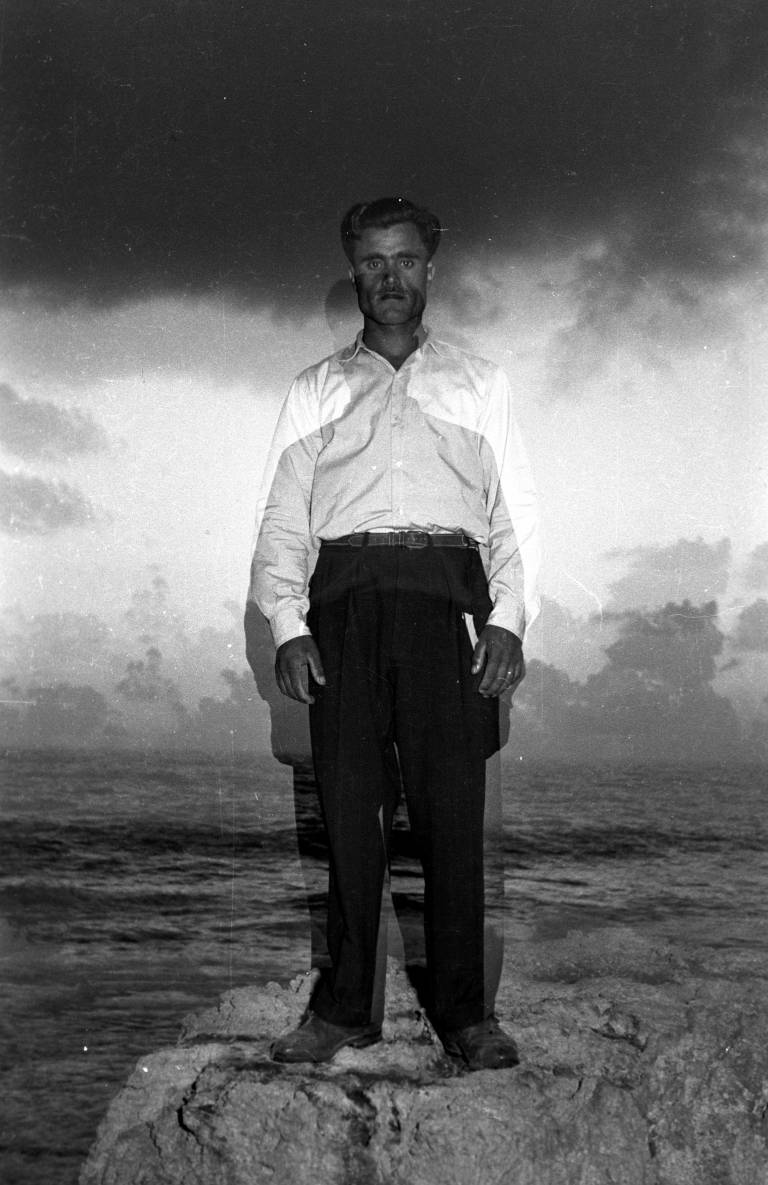 The Institute of Advanced Studies is delighted to welcome Akram Zaatari for this talk.

"In the folds within a photograph lies a history; lie many histories. A single photograph is not enough to seize the totality of a situation or a space as an example. Architects take multiple photographs to document a space, a construction, a building site. They record different elevations, angles, interiors, and details. Each photograph represents an aspect of a space, a facet of a place or building. The more photographs produced, the more details recorded. The more diverse the angles from which photographs are taken, the better three-dimensional space is described, as in photogrammetry. The ultimate documentation aims to leave no room for the fold, as in seamless 360° interactive photographs.

The fold in a photograph is a detail that triggers a process. Through it a different narrative from that of the photograph itself—unfolds. It is a feature through which the initial construction of a photograph—its making—is undone. It bears the history of a photograph, its memory, and that may allow its unfolding. If the purpose of a picture is to narrate or describe space, it is fair to say that the folds in it may tell the story of the maker’s practice, for example, or the limitations of the medium used." Akram Zaatari. The Fold

Born 1966 in Lebanon. Lives and works in Beirut.

Akram Zaatari has produced more than fifty films and videos, a dozen books, and countless installations of photographic material, all sharing an interest in writing histories, pursuing a range of interconnected themes, subjects, and practices related to excavation, political resistance, the lives of former militants, the legacy of an exhausted left, the circulation of images in times of war, and the play of tenses inherent to various letters that have been lost, found, buried, discovered, or otherwise delayed in reaching their destinations. Zaatari has played a critical role in developing the formal, intellectual, and institutional infrastructure of Beirut's contemporary art scene. He was one of a handful of young artists who emerged from the delirious but short-lived era of experimentation in Lebanon's television industry, which was radically reorganized after the country's civil war. As a co-founder of the Arab Image Foundation, a groundbreaking, artist-driven organization devoted to the research and study of photography in the Arab world, he has made invaluable and uncompromising contributions to the wider discourse on preservation and archival practice.

Zaatari’s represented Lebanon at the Venice Biennial in 2013. his work has been featured at Documenta13 in 2012. His films include two features: Twenty-Eight Nights and A Poem (2015) and This Day(2003). His work is part of institutional collections such as the Centre Pompidou, Guggenheim Museum, Hammer Museum, K21, MACBA, MoMA, Serralves Foundation, Tate Modern, and Walker Art Center.

The talk follows the opening of The Script at Turner Contemporary, Margate, a new work commissioned by New Art Exchange this year. Following the exhibition in Margate, The Script will travel on to Modern Art Oxford from 23rd March to 12 May 2019.

Please note that there may be photography and/or audio recording at some events and that admission is on a first come first served basis. Please follow this FAQ link for more information.