UCL research into the groundwater-arsenic crisis in the Bengal Basin has changed national and international policies, and improved public health security for over five million people. 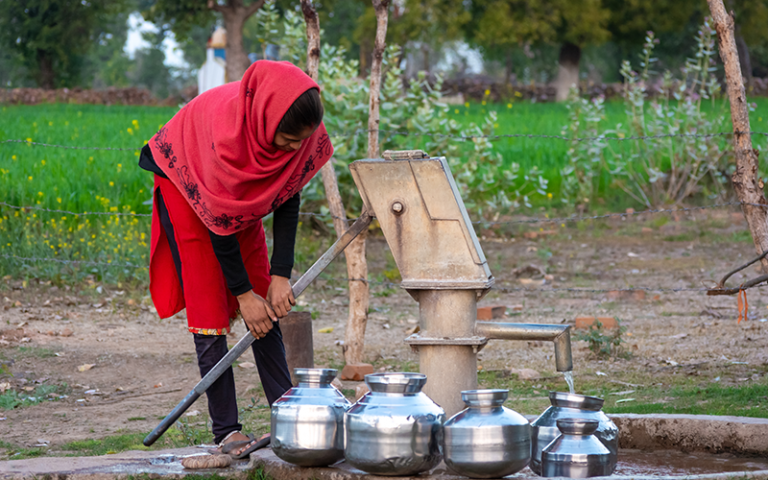 Exposure to arsenic can cause cancers, circulatory disease and death and is a global threat to public health. Since 1990, water supply monitoring has highlighted many areas where arsenic levels are high, including in the densely populated floodplains of Southeast Asia, where shallow groundwater provides the only microbiologically safe water source for more than a billion inhabitants. In places, arsenic levels are up to 100 times the World Health Organisation guideline limit for drinking water.

A team at UCL’s Department of Earth Sciences led by Professors William Burgess and John McArthur has worked in collaboration with colleagues in Dhaka, Bangladesh, the University of Delhi, and others. Through an extensive programme of fieldwork and laboratory testing, the team discovered that groundwater arsenic pollution in Bangladesh is a natural phenomenon and derives from the underlying rock sediments, in particular through hydrochemical interaction with peat beds.

The team developed sophisticated models to show how groundwater flow controls present-day arsenic concentration at shallow pumping wells and to help predict future trends. In collaboration with colleagues in Bangladesh, they went on to demonstrate that deep groundwater, which is free of excessive arsenic, could provide a safe alternative water supply and developed a map of the hydraulic structure of the Bengal Aquifer System to help track the passage of contaminated water.

In Bangladesh, through Professor Burgess’ engagement with policymakers, operational NGOs and sanitation experts, the work has guided the development and refinement of national policy on groundwater pumping. It has also informed practical approaches adopted by the Department for Public Health Engineering (DPHE) and the Bangladesh Water Development Board to monitor groundwater arsenic levels and improve access to safe water across the region. UNICEF has also adapted its policies relating to arsenic contamination and to water resource security assessments by the World Bank.

Improving the health of millions

Secure in the knowledge that arsenic pollution in Bangladesh is natural, in the early 2000s local ministries quashed demands for a blanket ban on groundwater irrigation pumping. The UCL team’s evidence has helped ensure Bangladesh and India can continue to produce sufficient grain to feed their own populations. Subsequent confirmation that deep groundwater in Bangladesh is free of excessive arsenic gave DPHE the evidence needed to develop the WASH Sector Development Plan that is now delivering safer drinking water and reducing arsenic exposure for over five million people across southern Bangladesh, enhancing the health and quality of life.

UCL research has identified how naturally-occurring, toxic arsenic enters groundwater in the Bengal Basin in Bangladesh and has changed national and international policies towards managing the groundwater-arsenic crisis and the development of infrastructure for groundwater resources monitoring. This has reduced population exposure to arsenic and improved public health security for over five million people across southern Bangladesh.