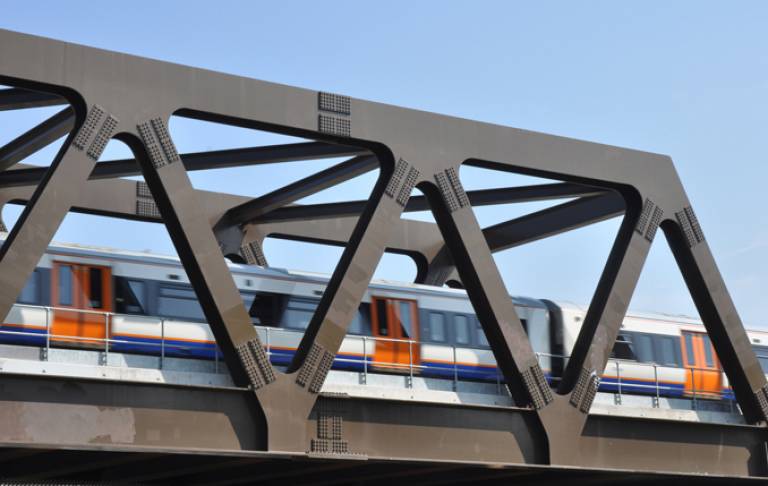 Research on polycentricity by the late Professor Sir Peter Hall was instrumental in the design of High Speed 1 (which contributed to the regeneration of Stratford, London), and the proposals for High Speed 2, as well as London's orbital railway and many rail projects in the UK and Europe.

Professor Sir Peter Hall (1932-2014) of the UCL Bartlett School of Planning was one of the greatest planners in modern times: a pioneering thinker whose research led to dramatic changes in the fabric of cities across the world. In the UK, his work led to some of the most influential planning ideas, such as enterprise zones (of which London's Canary Wharf may be the most dramatic example); the development of an orbital rail system in London; and strategic growth corridors along high-speed rail services.

He was one of the pioneering thinkers seeking to understand polycentricity and devising ways planners could take advantage of its benefits whilst mitigating potential issues. In the UK and Europe, cities and towns have become more and more polycentric, with individual urban centres linked by fast public transportation. Yet this has its limits: high-speed networks can easily lead to the growth of larger cities and their surrounding regions, with other urban areas left rapidly behind.

In 1993-1996, Professor Hall was deeply involved in the strategic design of the Channel Tunnel Rail Link, which is today known as High Speed 1 (HS1). As advisor to the successful bid by the London and Continental Railways Consortium, he developed the Thames Gateway strategy, which sought to regenerate the London Docklands area and the wider Lower Thames region. Following Professor Hall's advice, the HS1 route was configured to include stations at Stratford, then a depressed area of East London, and at Ebbsfleet in Kent. HS1 opened in 2007, and Stratford International Station came into use for domestic services in 2009. This was a principal consideration in the International Olympic Committee's choice of London as the location for the 2012 Olympic Games, with the knock-on effect of massive investment in Stratford. Thanks to the London Olympics the area received an estimated £9bn pounds in private investment. The Stratford International Station is now one of the busiest in London, and HS1 itself carried about 4m passengers on special shuttle services during the events.

Further research by Professor Hall was instrumental in making the case for High Speed 2 (HS2) linking the north of England to London and the Continent. While the proposal remained controversial at the time of Professor Hall's death, Phase 1 of HS2 is expected to connect London and the West Midlands by 2026. Professor Hall's joint article with local experts in proposing high-speed North was embraced and backed up in a follow-up proposal of HS3 by central government to enhance a fast connectivity across northern core cities. Alongside high-speed rail investment, Professor Hall maintained the importance of improving intra-regional and inter-urban connections from and to HS2 hubs for wider regional benefits.

From 2008-14, Professor Hall was the director of the European Union's SINTROPHER project, a €23 million combined research and investment programme to improve connectivity between key national and international transport hubs (including the emerging European high-speed rail network) and five 'peripheral' regions in north-west Europe, using innovative transport links such as tram-train. SINTROPHER led to major investments in UK and European rail service including, for example, development of new tram/rail transport hubs in West Flanders at Koksijde, Veurne and Diksmuide; completion of Phase 3 (Line 2) of the Valenciennes tramway, a major €150m European demonstration project involving a bi-directional single track system, the first large-scale system in Europe; the upgrading and £20m extension of the Blackpool tramway which carried over 5m passengers since reopening in 2012; planned €50m extension of the Flemish Kusttram system; and enhancements to the RegioTram system in Nordhessen.

In London, Professor Hall proposed, as early as 1999, the early completion of the Orbirail: he suggested linking separate rail lines in London into a single outer circle train system which would encourage polycentric development at key interchanges. The proposed system manifested as the fully connected London Overground, which opened in 2012. As a result, passenger numbers went, the Mayor of London Boris Johnson claimed, 'through the roof'. In 2013, Transport for London announced a £320 million programme to increase capacity by 25%, and to introduce five-car trains on all London Overground routes to meet rapidly increasing demand. In 2013 the Chancellor of the Exchequer further announced £115 million funding for electrification of the Gospel Oak-Barking line, potentially extending the service to major urban regeneration in Barking Riverside - a key site in Professor Hall's Thames Gateway proposals.