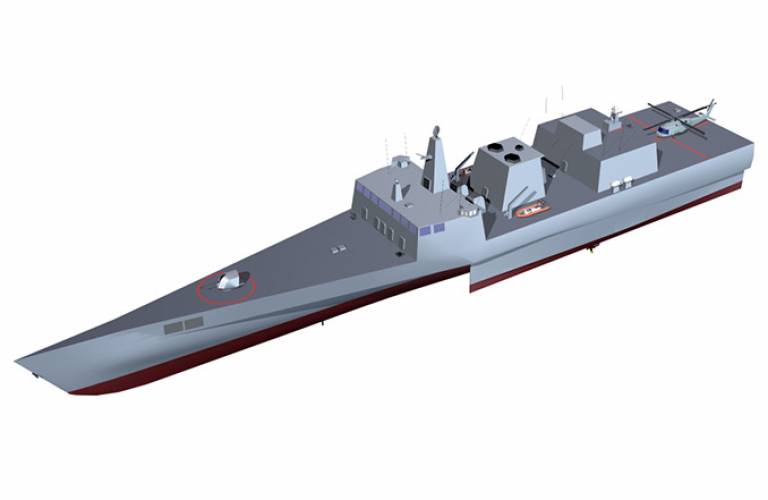 A novel ship design with two slender side hulls supporting a main central hull enables the US Navy to operate its helicopters in bad weather, and ferrying cars and passengers between the remote islands of the Canaries. The ship, known as a trimaran, cuts fuel consumption and harmful greenhouse gas emissions at the same time.

UCL designed the first of a series of ocean-going trimaran ship studies in the early 1990s, which led to the building of the 1,200 tonne prototype trimaran vessel RV TRITON for the UK Defence Establishment Research Agency (DERA) in 2000. The Australian Customs and Border Protection Service has successfully used RV Triton as a coastal patrol and fisheries protection vessel on the northern tropical coast of Australia. Triton was selected over alternative equivalent monohull vessels for this patrol role because the trimaran offers lower resistance, improved sea-keeping and improved larger upper deck area. The lower resistance at high speeds allows the ship to achieve a superior range and improved fuel economy, hence lower CO2 emissions, while other benefits include a large working deck area.

When assessing the ship type, UCL researchers explored the challenges of both the naval architecture and marine engineering the trimaran hullform. It can be challenging to fit the propulsion engines into the ships' narrow centre-hull while retaining the advantage of increased efficiency that the slimmer hullforms offer. Further research was funded at UCL via an Office of Naval Research (United States) via UCL's involvement in the ACCeSS programme, which is a partnership with six US universities.

At the end of the Cold War the US Navy determined a need for new ship types to combat asymmetrical littoral (close to shore) threats and the littoral combat ship (LCS) concept was born. The Independence Class LCS uses the trimaran design, and tests by the US Navy have shown it provides significant benefits to naval operations, including the largest usable payload volume per tonne of ship displacement of all US Navy surface combatants, a large flight deck that has facilitated near-simultaneous operation of two helicopters, proven capability of operating the large H-53 helicopter, and operations of multiple unmanned vehicles for reconnaissance and warfare operations. The increased stability of the trimaran hullform has improved flight operations by allowing them to be achieved in worse weather than equivalent-sized monohulls and catamarans.

The first modular high-speed trimaran LCS was designed by General Dynamics and built by Austal (USA) and commissioned into the US Navy USS Independence (2008) and was followed by USS Coronado built at Bath Iron Works (USA) (2012). Four more trimaran Independence Class vessels have been ordered since 2008, and eventually a fleet of 20+ LCS trimaran vessels is expected. An important economic benefit of the trimaran LCS programme has been to support jobs at Austal's site in the United States, which has been able to double its workforce to 3,800.

The trimaran model is also applicable to commercial vessels: the trimaran ferry Benchijigua Express built by Austal (Australia) which entered service in 2005 and is used to carry cars and passengers between the Canary Islands.