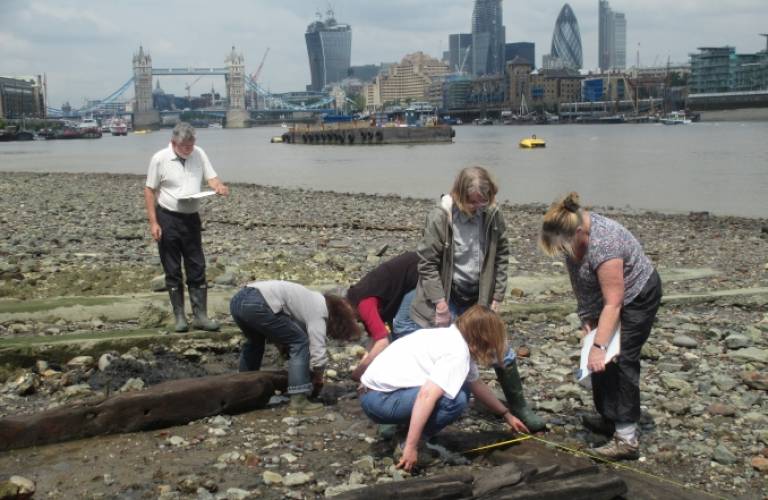 The banks of the Thames preserve the record of 10,000 years of habitation - features which are exposed twice daily when the tide ebbs, but are subject to severe erosion when the tide rises.

This vast archaeological site runs through the heart of London and provides a unique opportunity to involve communities in archaeology - as well as challenges for the discipline due to the changeable nature of a tidal environment.

Gustav Milne (UCL Institute of Archaeology) is a leading authority on waterfront archaeology and led the Thames Archaeological Survey which showed that archaeological sites, layers and features from the prehistoric period to the Blitz existed on the foreshore but were under threat from tidal scour or waterfront development. The parts of the foreshore under threat from development are, as a matter of planning policy, recorded before they are destroyed, using methods developed by the survey. However, the major of sites are being destroyed daily by tidal scour, and it is this challenge for which community archaeology provides an important solution.

The Thames Discovery Programme (TDP), run in collaboration with the Museum of London, trains a volunteer group, known as the Foreshore Recording and Observation Group (FROG) to monitor selected sites in Central London. This provides valuable archaeological data before it is destroyed, feeds into the Riverpedia database, and is an extremely successful model of community archaeology.

" I have got one O level. This has been a great opportunity for me to work with academics, which I wouldn't have been able to do otherwise - Participant, Thames Discovery Programme

Since its establishment in 2008, the TDP has grown to over 400 trained volunteers. Of the 331 trained in its first phase, over a third had no previous archaeological experience and 45% were from London boroughs classified as amongst the most deprived local authority areas in England. Events and workshops reach an even wider audience: in 2008-2011, the TDP held over a hundred events for the public, aside from training programmes for FROG participants.

The TDP is now recognised nationwide as a model of community archaeology and has won numerous awards. The TDP website itself is acknowledged as a significant resource: in 2010 it won an award for the best representation of British Archaeology in the media, and is supplemented by a vast and well-used video, image and document archive. The TDP has been featured in numerous television programmes, including Digging for Britain and a Time Team Special on Isambard Kingdom Brunel, which had 1.5 million viewers in 2011. The project also serves as the model for the nation-wide CITiZAN community archaeology project supported by the Heritage Lottery Fund, which will extend the work all round the English coast from January 2015..