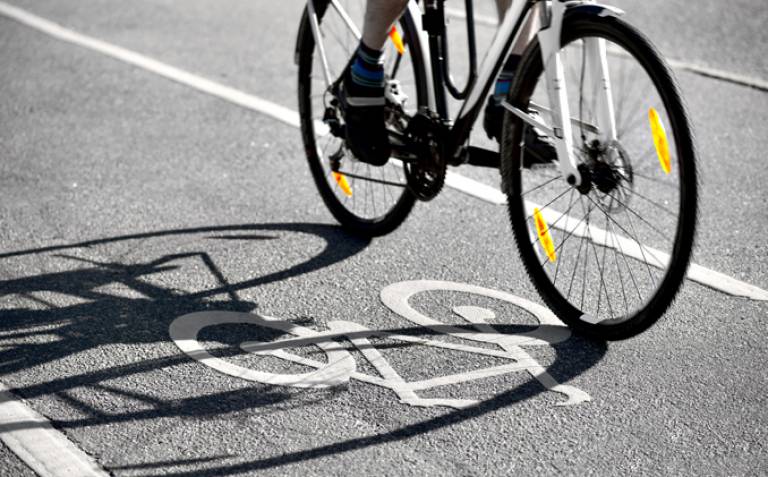 Sustainable transport research at UCL has contributed significantly to a major shift in UK and international transport policy to include consideration of climate change. Since 2006, the desire to reduce transport CO2 emissions has become a major aim of transport policy.

Carbon dioxide emissions from transport have risen in cities across the world, providing a strong motivation to examine how these can be reduced. But before 2006, climate change was largely ignored in UK transport planning. Since then, there has been a major transformation in this area, with the desire to reduce transport CO2 emissions now often the primary aim of transport policy.

This major shift in emphasis has been informed, in part, by findings from a UCL study commissioned by the Department for Transport (DfT) between 2004 and 2006, which was the first to consider the issue at a national level. The study, by Professor David Banister and Dr Robin Hickman (UCL Bartlett School of Planning), identified a need for much greater use of walking, cycling, public transport and urban planning, as well as low-emission vehicles, to significantly reduce transport CO2 emissions. A further study carried out between 2007 and 2009 looked at the potential for low-carbon transport pathways to be developed and implemented in London, and the likelihood of meeting the mayoral CO2 emission reduction target in London.

Findings from the research have been used by regional and national authorities to support and implement programmes promoting sustainable transport. This has contributed to increased public transport use, more walking and cycling, and reduced dependence on cars.

A report from the Environmental Audit Select Committee in the House of Commons cited the UCL work extensively, and proposed that DfT become more progressive on the topic. Since then, significant changes have been made in national, regional and city-based transport programmes and urban planning. These have included much increased funding in public transport, walking and cycling, through dedicated transport funds in London and the Local Transport Plan mechanism elsewhere in the UK. The DfT has provided a local sustainable transport fund of more than £100 million.

The research has fed into plans devised by city and regional authorities, including the London Mayoral Transport Strategy, which now includes reducing transport CO2 emissions as a major objective, and in local transport plans in Oxfordshire and Swindon. These will be put into action over the next 10-20 years, with the purpose of significantly changing travel behaviours and reducing CO2 transport emissions.

Our studies on transport and climate change mitigation came at a critical time, helping to formulate responses from the transport sector to the climate change problem. Many cities have since adopted progressive strategies in investing in public transport, walking and cycling - and integrating their urban form alongside the transport investment. - Dr Robin Hickman, UCL

The research methods developed through the UCL studies are now commonly used by government, consultancy firms, and in academia. For instance, quantifying the likely impact of different scenarios was rarely used in transport studies before the 2004 UCL study, but is now used in almost all studies of mitigation in transport, providing better evidence for policymakers.

The Asian Development Bank has used UCL-pioneered approaches in modelling low-carbon transport in Indonesia, Malaysia, Philippines, Singapore, Cambodia and Thailand, and in studies on sustainable mobility and investments in sustainable transport projects.