Study A leads to changes in tuberculosis treatment guidelines 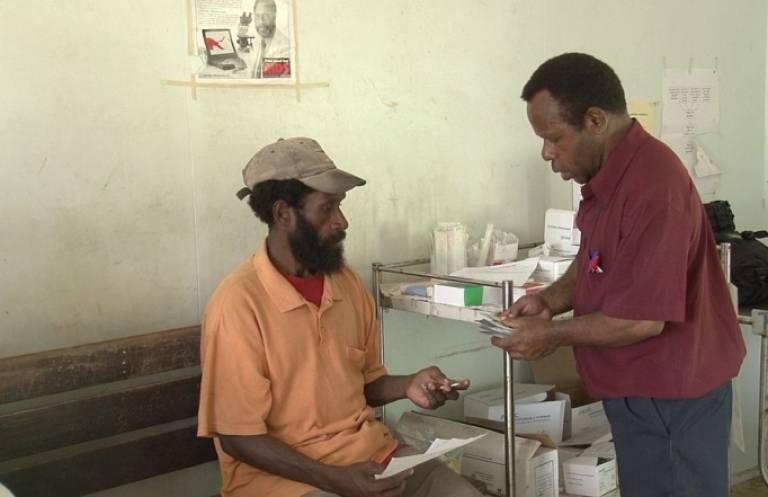 Research in which UCL participated led to changes in World Health Organization recommendations on the treatment of tuberculosis. These have been adopted by almost all countries, leading to improved treatment for nearly 8 million patients and reducing the number suffering relapse.

Tuberculosis (TB) is a major global health problem, with 9 million new cases and 1.5 million deaths in 2013. Until 2010, the World Health Organization (WHO) recommended an eight-month treatment (which administered the antibiotic rifampicin for the first two months) for newly diagnosed pulmonary TB. Following the findings of a study by UCL researchers on the comparative efficacy of three different antibiotic regimens, this was changed to the gold standard six-month treatment (which administers rifampicin throughout the treatment).

Dr Amina Jindani, Professor Andrew Nunn (MRC Clinical Trials Unit at UCL) and Professor Donald Enarson, conceived and conducted Study A, which tested the efficacy of two eight-month treatments (including the one recommended in international guidelines at the time) and the six-month treatment. The study found that there were significantly better outcomes in patients treated with the six-month course compared to those treated with the eight-month courses.

The results of Study A were published in 2004, providing evidence that filled an important gap in knowledge in TB treatment. Evidence from Study A was included in several influential publications between 2004 and 2009. In 2010, the WHO carried out a systematic review of the evidence on the treatment of TB. This included the results from Study A, which were graded as the most convincing of the available evidence. Professor Nunn was a member of the expert advisory group which helped to develop these new guidelines. The WHO guidelines included the recommendation "to discontinue the regimen based on just 2 months of rifampicin (2HRZE/6HE) and change to the regimen based on a full 6 months of rifampicin (2HRZE/4HR) [which] will reduce the number of relapses and failures. This will alleviate patient suffering resulting from a second episode of tuberculosis (TB) and conserve patient and programme resources."

As surveys of national TB policymakers have shown, WHO guidelines are very influential for national TB policy, particularly in African countries, which face a high burden of the disease. A number of national guidelines for TB have been updated to reflect the WHO recommendations based on Study A, including those for Ethiopia, South Africa and Zimbabwe. Routine data collected by WHO shows that in 2011, 196 out of 206 countries reported using the gold standard six-month regimen for new TB patients. The number of new TB cases (excluding multi-drug resistant TB) in these 196 countries totalled nearly eight million in 2011, so the results of Study A have had a wide-reaching impact (although it should be noted that not all of these countries were previously using the eight-month regimen). National Ministries of Health have benefited from the research, as the six-month patient kit is US$4-10 less expensive than the eight-month patient kit. Moreover, reducing the number of people requiring retreatment also reduces costs. This allows more people to be treated with the available (limited) resources.

This will alleviate patient suffering resulting from a second episode of tuberculosis (TB) and conserve patient and programme resources. - WHO guidelines 2010 describing the benefits of using the new gold standard six-month course of treatment, whose benefits were proven in Study A

From the perspective of the eight million patients affected, the six-month treatment has several benefits over the previous eight-month regimen. As well as reducing the number of people who have unfavourable outcomes and require retreatment, it also reduced the time in which patients were exposed to toxic drugs and the inconvenience of attending health care facilities for treatment.