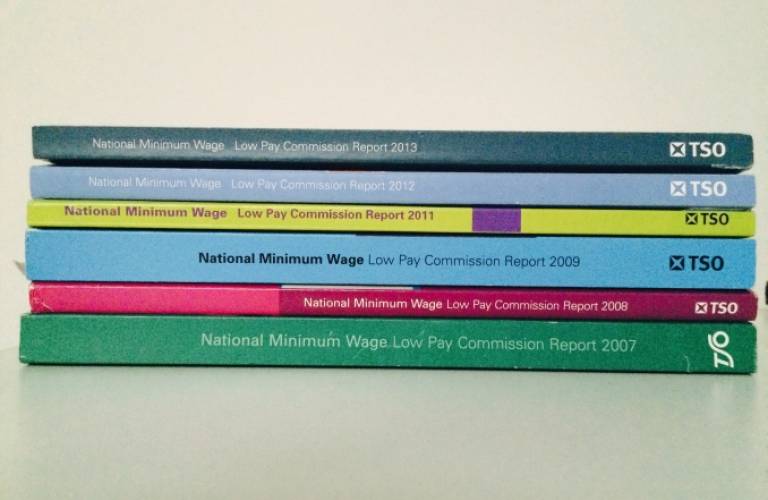 Research by Professor Stephen Machin and his co-authors changed the policy context before a National Minimum Wage was introduced in 1999, and has since provided the guiding logic for the operations of the Low Pay Commission.

Until 1999 many economists and policymakers thought that introducing a National Minimum Wage (NMW) could lead to the loss of up to two million jobs. Professor Stephen Machin (UCL Economics) provided the empirical analysis which demonstrated that this was not the case. He showed, in 1996, that a minimum wage pitched at the 'right' level both need not harm employment and, indeed, has the scope to give a significant wage boost to raise the incomes of the poorest workers in the economy.

This provided an important boost to the argument for a NMW. In 1997 a Low Pay Commission (LPC) was appointed and published its first reporting recommending a NMW the following year, citing no fewer than 22 of Professor Machin's papers. In 1999, the NMW came into effect and since then the LPC has set the rate annually, underpinned by the guiding logic from Professor Machin's research that an appropriately set NMW does not harm the economy.

The principal beneficiaries of this were, of course, the UK's low wage workers: about 4% of workers, around a million people, are in minimum wage jobs. Between 2008 and 2012, the LPC raised minimum wages by 8% (in line with the research), whilst the wages of the 'typical' worker in the Labour Force Survey (at the 50th percentile in the wage distribution) grew by only 5% in nominal terms. Thus the NMW acted to keep up the relative wages and, by association, the living standards of low wage workers.

" The use of robust evidence and development of a framework which acknowledges that a national minimum wage set at the right level can significantly raise the wages of low wage workers whilst at the same time not harm their employment prospects has been the guiding logic used by the Low Pay Commission over the years. - Professor Stephen Machin

Following Professor Machin's research finding that in an economic downturn, care had to be taken in raising the wages of younger low wage workers, who are more prone to unemployment during recessions. Accordingly, during the years of the downturn, the Low Pay Commission decided not to raise the minimum rate for 18-20 year olds by as much as the adult rate.

Professor Machin himself was a Commissioner from 2007 to 2014 and contributed directly during this time to commissioning research to ensure that the NMW was set appropriately for the existing economic conditions of the time. For example, the LPC commissioned research on the impact of minimum wages on firm profitability from the upratings of the minimum wage which found that (in line with Professor Machin's own research) profit margins were squeezed by the minimum wage over the longer time period 1999 to 2007.

The NMW has been a highly popular and successful policy. A recent policy overview from the Institute of Government reported that the "minimum wage tops the chart of the most successful policies of the last 30 years".

Research was funded by the ESRC-funded Centre for Economic Performance.