Researchers at UCL developed an innovative means of empowering museum visitors to engage directly with curators and each other in a two-way conversation using social media. First pioneered at the UCL Grant Museum of Zoology, this technology has been used at the Museum of Brands, London, and the Imperial War Museum.

The traditional form of the museum is a didactic one: it is intended to instruct visitors in a one-sided communication; a form of interaction which tends to alienate visitors and distance curators from the needs and interests of the public they serve. To bridge this gap, researchers at UCL Information Studies and the UCL Centre for Advanced Spatial Analysis worked with the UCL Grant Museum of Zoology to develop a means of empowering museums visitors to think of exhibits as social objects, and discuss them interactively with curators and other visitors. The research project investigated these questions: can visitors to a museum be trusted to engage and answer challenging questions posed by a curator? Is it possible to elicit a dialogue between visitors and curators that encourages interpretation and analysis of objects, using digital methods?

The result of this project was QRator: a means of enabling visitors to interact via iPads, through QR codes, or the QRator website instead of simply reading static museum labels. Through these easy-to-use formats, researchers found that visitors engaged in complex dialogues regarding provenance, as well as moral issues around acquisition, retention and display. 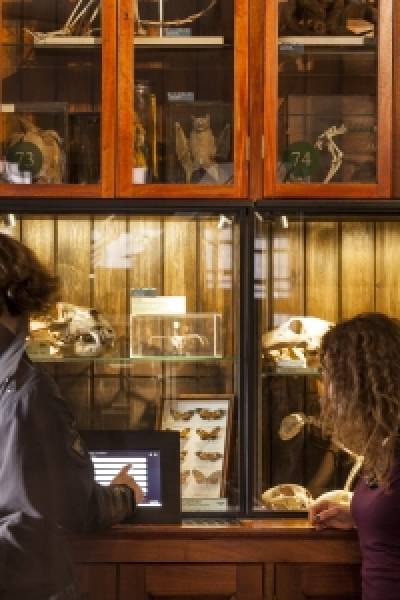 QRator was launched at the Grant Museum in 2011. By 2013, it had received over 4,300 comments, or one for every three visitors, compared to the miniscule numbers who wrote in the visitor book or spoke to staff.

The museums and heritage sector immediately recognised the valuable contribution QRator makes to the visitor experience, without feeling intrusive or gimmicky. In 2012, it won an UK Museums and Heritage Award for Excellence 2012 in the Innovation category as "…impressive in the way it encourages participation within museums but also, importantly, in maintaining that participation beyond the walls of the museum when visitors have returned home".

In 2012, the research team was invited to trial QRator at the Imperial War Museum's A Family in Wartime exhibition in both IWM North and IWM Lambeth. The project, which used interactive touch screens and social media to enter into digital conversations with each other and the curators, received over 26,000 comments from visitors to the two sites. QRator is now also available at London's Museum of Brands.

QRator has helped the Museum to become a truly experimental space, engaging directly with our visitors and allowing them to feed into how museums operate. - Jack Ashby, UCL Grant Museum