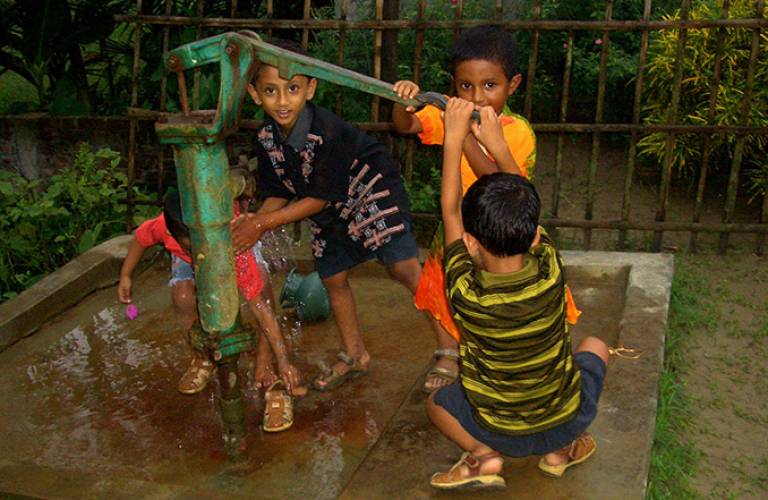 Research into arsenic pollution of groundwater in the Bengal Basin has helped transform policy, practice and public health security in Bangladesh, reducing arsenic exposure for around 10 million people. Globally, it contributed to UNICEF's development of policies relating to the investigation and mitigation of arsenic contamination.

Arsenic exposure - the adverse effects of which include cancers, diseases of the vascular system, and death - presents a serious global threat to public health. Since 1990, extensive arsenic pollution of groundwater has been recognised in delta sediments exploited for water supply. The problem is especially acute across the densely populated floodplains of southeast Asia, where shallow groundwater had been thought the only bacteriologically safe source of water for more than 100 million inhabitants. In Bangladesh and West Bengal alone - where shallow groundwater contains arsenic at concentrations up to 100 times the World Health Organization limit for drinking water - some 70 million people are affected.

Research by Professor John McArthur and Dr William Burgess (UCL Earth Sciences) has addressed the presence of arsenic in the Bengal Basin, which acts as a model for delta aquifers across the world. The research demonstrated that arsenic pollution in Bangladesh is a natural phenomenon caused by buried peat. This overturned the previous consensus that arsenic enters groundwater in response to lowering of the water table through pumping.

This work has hugely influenced policy, practice and public health security in Bangladesh. The research guided the development of policy on groundwater pumping in response to the crisis and underpinned practical approaches towards arsenic mitigation and groundwater monitoring; as a result, it has improved public health security across the region, with a reduction in arsenic exposure for approximately 10 million people. By demonstrating that irrigation pumping is not the cause of arsenic pollution, the research countered popular demands and government intentions to curb irrigation, thereby supporting the country's continued food-grain self-sufficiency.

In 1998, there were demands both within civil society and at ministerial level for a ban on groundwater irrigation, then thought to be the cause of arsenic pollution. The UCL discovery that contamination was natural transformed the public debate about the issue, supporting counter-demands that ensured the continuation of groundwater irrigation.

UNICEF, the United Nations' children's agency, has used the research in its development of global policies relating to the investigation and mitigation of arsenic contamination. UNICEF has been a leading international provider of mitigation programmes responding to the arsenic crisis in southeast Asia and adopted UCL's explanation of the underlying causes of arsenic pollution in the Bengal Basin as the standard means of understanding how it arises in alluvial aquifers worldwide. By demonstrating that the contamination in Bangladesh was both predictable and manageable, UCL research underpinned UNICEF's development of policies for its country offices, and proposals for effective responses.  Another strand of work showed how the flow of groundwater controls present-day arsenic concentration at shallow pumping wells, and suggested future trends. With collaborators in Bangladesh, UCL researchers were able to determine the potential for deep groundwater, which is free of excessive arsenic, to provide a safe alternative water supply.

The implementation of deep groundwater pumping strategies by the Bangladesh government between 2000 and 2013, to designs informed by UCL research, is estimated to have reduced arsenic exposure among some 10 million people across southern Bangladesh, improving their health and quality of life. One programme alone involved the drilling of 3,966 deep tubewells between 2006 and 2011, targeting 8.5 million people, mostly living in rural areas.

By 2013, policymakers and donors saw deep groundwater as a long-term secure water source to mitigate the effects of arsenic and salinity in southern Bangladesh.

Children at water pump in Bangladesh. Courtesy of Vipez on Flickr