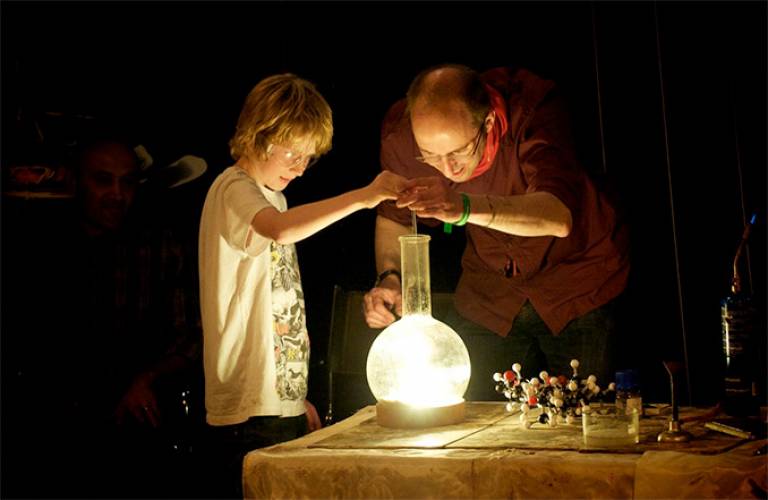 UCL Chemistry has for many years run a substantial programme of public outreach. Public and schools talks introduce audiences to the fundamental ideas of chemistry in engaging ways, in an effort to reduce the marginalisation of chemistry within society.

Almost all academic staff in UCL Chemistry have an accessible talk on their research suitable for a range of audiences.

Professor Andrea Sella has spearheaded much of the outreach work through regular radio and TV appearances. He was a consultant and demonstrator for the award-winning documentary The Secret Life of Chaos, presented by Jim Al-Khalili. He also contributed to BBC Four's The Secret Life of Ice and the Bafta-nominated Chemistry: A Volatile History, which holds the record for the highest audience of any science series on BBC Four.

UCL Chemistry also works to promote chemistry and science among secondary school children. For example, the department has been extensively involved in The Training Partnership's A-level student lecture programme and it regularly holds lectures for schools. Talks at individual schools, including demonstration lectures, are increasingly done by postgraduate students, giving pupils the chance to talk to real researchers of a similar age to their own.

Since 2009 UCL researchers have been involved in Bright Club, a monthly comedy event that brings researchers to a new audience: 20-50 year olds who have no existing relationship with academia.