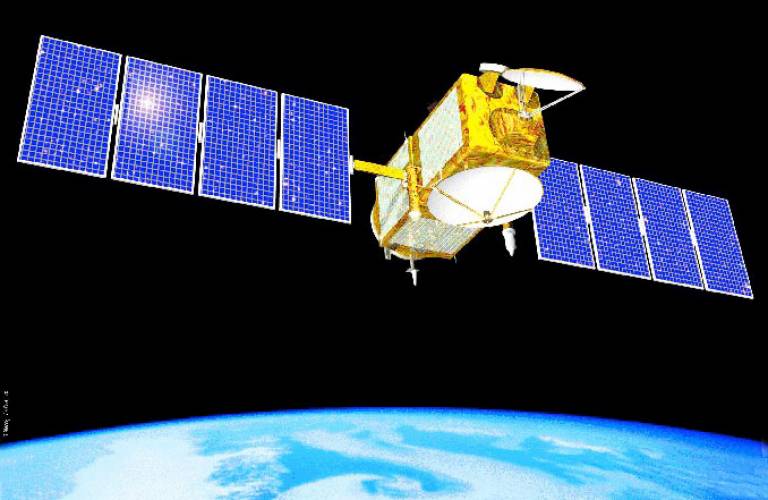 NASA has changed how it models the effect of radiation forces on several types of space vehicle after UCL research improved methods for determining their orbits. The satellites now provide more precise data for various applications, including monitoring the effects of climate change and in GPS satellite navigation systems.

One of the satellites was Jason-1, NASA's main mission for measuring sea level change. Ocean monitoring provides one of the best ways of modelling long-term climate effects, because thermal expansion and ice cover loss from glaciers and ice sheets contribute to rises in sea level. This monitoring is carried out using high-accuracy altimetry satellites that are able to record millimetre-level changes in sea level, which enables precise calculations of temperature changes in the ocean over time. Every ten days between 2001 and 2013, Jason-1 produced a model of the shape of the world's oceans, providing accurate indications of long-term changes in sea level. Jason-1 data constituted a critical element in the geophysical data records (GDRs, compiled by NASA, and used widely by oceanographers to monitor and model ocean dynamics) determining changes in the ocean's surface, thus forming one of the most powerful pieces of evidence to show that the Earth's climate is changing.

Throughout Jason-1's lifetime, the GDRs were submitted to the Intergovernmental Panel on Climate Change (IPCC), the world's principal climate science assessment body, whose members include representatives of 195 governments. The radiation modelling techniques established at UCL, which were adopted as operational standards by NASA in 2010, removed significant systematic biases in the satellite orbits, reducing anomalies in the sea level records passed to the IPCC.

In 2007 and 2014, the IPCC released its Fourth and Fifth Assessment Reports on the scientific basis, impacts and mitigation of climate change. They included details of the recorded change in sea level to that point, based on Jason-1 outputs. These reports form the basis of discussions between policymakers and other stakeholders at the UN's annual climate change conferences, at which governments try to reach agreement about how to deal with the impact of climate change.

The research has a more day-to-day use as well, by changing the way in which the orbits of all GPS satellites are calculated. Those satellites have applications in areas as diverse as monitoring the earthquake cycle and measuring plate tectonics, as well as for routine navigation applications in electronic devices such as smartphones, which are used by billions of people around the world.

The main impact has been at the scientific end of the spectrum, leading to an accuracy improvement by a factor of 2.5 in the computed satellite orbits. The International GNSS Service produces daily orbit calculations for all satellites; its adoption in 2010 of the techniques developed through UCL's work allowed it to improve its orbit accuracy from 5cm to 2cm. This data is used to determine the terrestrial reference frame (TRF), the system of coordinates used for monitoring the shape of the earth. The TRF forms the fundamental basis for monitoring plate tectonics and height variation at tide gauges, among other applications such as modelling sea level change and post-glacial rebound (the movement of land that was covered by thick ice sheets during the last ice age), as well as commercial positioning services.