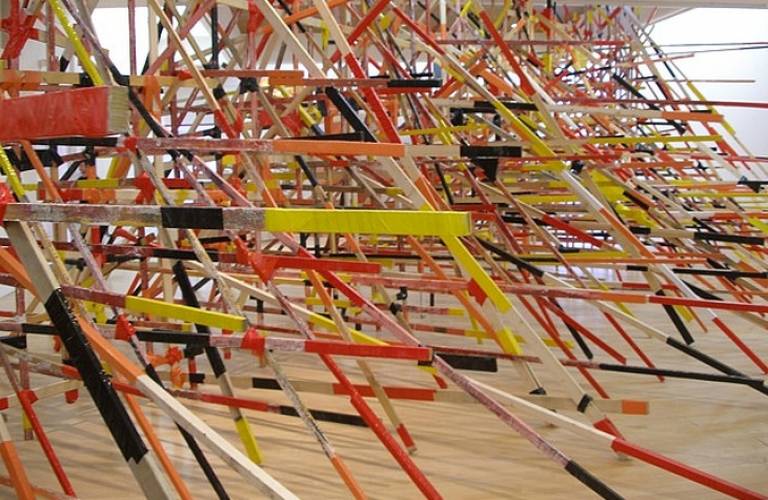 Professor Phyllida Barlow's sculpture has shaped how art professionals and the public relate to and understand contemporary sculpture. This was achieved through a series of high-profile exhibitions which increased the profile of and public interest in her work, and through the critical recognition and artistic responses it received. 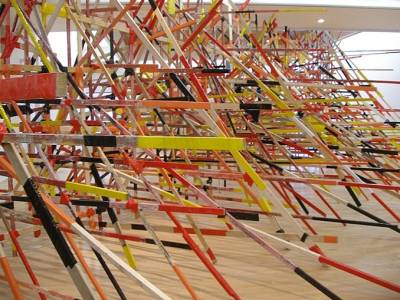 Professor Phyllida Barlow is one of the UK's greatest living sculptors. Rooted in over 20 years of research at the UCL Slade School of Fine Art, her approach to sculpture represents a new and appropriate response to an age of austerity. Her choice of materials - recycled and taken from familiar, non-art, urban contexts, and her use of paint - is one of the ways that her work promotes new forms of engagement with sculpture, including debate about its value. She creates a dialogue/tension between the experience of the sculpture in the gallery and the everyday, familiar experience and visual vocabulary of non-art objects and materials in the urban space outside. The scale, impermanence, site specificity and precariousness of her work expand on this tension.

Since 1993, she has moved towards an exploration of 'anti-form' - sculpture which is focused more on process and making than on final results. She has examined the relation of sculpture to painting and drawing, to the spaces it occupies, and to its viewers. In those contexts she asked where sculpture goes and who it is 'for', examined distinctions between public and private activity, process and the act/s of making, and explored methods of encouraging audiences' physical engagement in those acts. Professor Barlow also investigated sculpture as an impermanent medium by employing quick processes in work with cheap, mundane materials, and by actively dismantling and recycling the finished works.

This research was conducted through a series of exhibitions, lectures, publications and projects, starting with the Objects for... series in 1993 and continued in her 2004 exhibition Peninsula which tested the use of cheap mundane materials to produce sculptures which exploited the space they inhabited and prompted audience's physical engagement with the act of viewing. 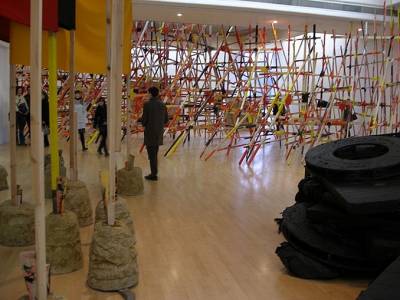 Following her retirement in 2009, Professor Barlow has built on this research, beginning with a Serpentine Gallery show in 2010 which attracted over 1,100 visitors a day, and included activities for hard-to-reach audiences including children from pupil referral units. In 2011, she presented the critically acclaimed solo show RIG of which the Evening Standard noted: "There is … an energy about Barlow's exhibitions that evokes an art that has been honed over several decades and suddenly unleashed". This continued in a series of groundbreaking exhibitions in the UK, Austria, Germany and the United States.

For example Siege, Professor Barlow's first solo show in New York (2012), was shown at the New Museum, Manhattan's only dedicated contemporary art museum, and was extremely well received in the New York Times and elsewhere. Hyperallergenic, a top New York arts 'blog-zine' with 250,000 unique visitors per month, welcomed this "Lesson from an Unknown Master" and called her art "amongst the best we have".

This acclaim has been accompanied by professional recognition. Her work has been acquired by major collections, including the Tate, the Government Art Collection, the Henry Moore Institute and the Ludwig Forum für Internationale Kunst, Aachen. In 2013, her work featured in the centrepiece exhibition of the 55th Venice Biennale; she was elected to the Royal Academy in 2011, and received the Aachen Art Prize in 2012.

[Barlow was] somebody who was developing in such an interesting way a new term of what sculpture could be, in the very differentiated realm of the contemporary world. - Director, Ludwig Forum